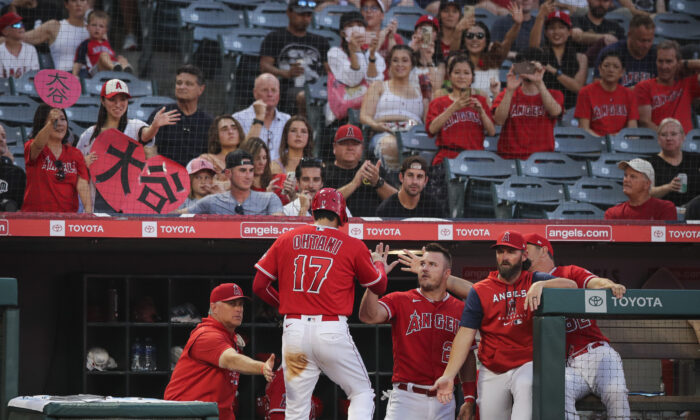 Shohei Ohtani (17) of the Los Angeles Angels celebrates scoring a run in the first inning against the Detroit Tigers at Angel Stadium in Anaheim, Calif., on Sept. 5, 2022. (Meg Oliphant/Getty Images)
Baseball

Trout hit his 30th homer of the season, Ohtani went deep twice (Nos. 31 and 32) and doubled, and Los Angeles’ Luis Rengifo had a triple among his four hits.

The Angels’ starting 2–3–4 hitters combined to go 10–for–14 with three homers, two doubles, a triple, five RBIs and eight runs.

It was all more than enough for Suarez (6–6), who allowed just three hits and one walk while striking out seven in a 92-pitch outing.

He held the Tigers hitless in all four of their at-bats with runners in scoring position.

Suarez has been at his best of late, giving up just nine runs, eight earned, in 41 innings over his past seven starts, good for a 1.76 ERA in that span.

The highlight of the game for the Tigers came in the eighth inning when outfielder Kody Clemens, son of Roger Clemens, entered the game to pitch and struck out Ohtani looking at a breaking ball that registered 68 mph on the radar gun.

After the strikeout, Clemens threw the ball into the Tigers’ dugout as a keepsake. He gave up one run and three hits in the inning.

The Angels started quickly, scoring twice in the first inning against Tigers starter Tyler Alexander (3–9). Trout singled and went to third on a one-out double by Ohtani.

Trout then scored on a single by Rengifo, and Ohtani scored on a groundout by Taylor Ward for a 2–0 lead.

The Angels hit for the cycle in the third inning when they scored three times. Trout doubled with one out and came home on Ohtani’s first homer of the night.

Rengifo followed with a triple and scored on Ward’s sacrifice fly. Matt Duffy singled with two outs to complete the cycle in the inning.

Trout homered to lead off the fifth inning, reaching at least 30 long balls for the seventh time in his career.

Duffy’s RBI double later in the inning increased the Angels’ lead to 7–0.

Ohtani hit his second homer of the game in the seventh, his 32nd of the season. Max Stassi’s RBI single later in the inning put the Angels up 9–0.

Ryan Aguilar’s RBI single off Clemens in the eighth gave Los Angeles its 10th run of the game.

Anderson gave up seven runs (six earned) on 10 hits in 4 1/3 innings. He struck out two without issuing a walk.

Andrew Wantz and Zack Weiss each struck out two in a scoreless inning to complete the Angels’ shutout.