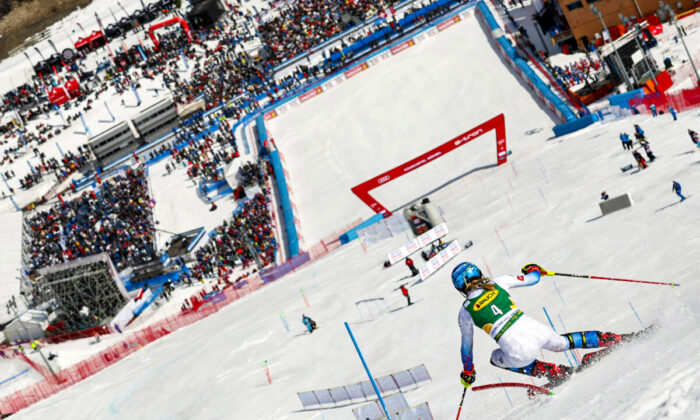 Mikaela Shiffrin tied with Lindsey Vonn, winning her fourth overall World Cup skiing title of her career on Thursday at the World Cup Finals in Courchevel, France. The American record-holders trail the all-time record by Austrian Annemarie Moser-Proll, with six titles in the 1970s.

Following a surprise third career victory in the downhill the day before, Shiffrin secured the overall title with a second-place finish in the super-G.

Shiffrin was congratulated at the finish of the downhill by her boyfriend, Norwegian Aleksander Aamodt Kilde, who won the men’s downhill an hour earlier on Wednesday.

“To be able to talk about that and discuss it, is incredibly helpful for me to improve on my downhill,” said Shiffrin. “But it’s also special to be able to share that.”

“It was incredible, how she raced was perfect,” Kilde told Austrian broadcaster ORF. “Together, this was a cool and incredible performance from both of us.”

Following a shockingly poor performance at the recent Winter Olympics, Shiffrin said, “It’s been some high moments this season and it’s been some really difficult moments as well.

“Ending it on a high, finding some really nice moments on the last races, that’s really important and very special.”

With Shiffrin’s 47 WC slalom wins, it’s the most by any alpine skier, in any discipline; and she is the only skier to have won 15 races in the same calendar year.

At 18 years and 345 days of age, she became the youngest slalom champion in Olympic alpine skiing history in 2014, and is the youngest ever to win 50 World Cup races, at the age of 23 years and 9 months.

At the 2019 World Championships, Shiffrin became the first alpine skier to win four consecutive championships in the same discipline with her Gold medal in the slalom.

Having won three straight overall titles from 2017 to 2019, and a difficult Olympics, “just this week, right now, I really enjoy skiing,” said the 27-year old Shiffrin.

Shiffrin and Petra Vlhova began the month tied with eight races remaining. Shiffrin increased her lead with 100 World Cup points winning the downhill, while Vlhova fell further behind with no points, placing 16th.

The Slovakian defending champion, Vlhova, then finished 17th at the Super-G, but needed to finish no worse than seventh to keep Shiffrin from extending her lead of over 200 points.

Shiffrin extended her lead over Vlhova by 236 points following Thursday’s second-place finish in the Super-G, locking up the overall World Cup title, as Vlhova is too far behind for any chance of a come-back, with only 100 maximum points available in each of their specialty slalom and giant slalom races remaining over the weekend.