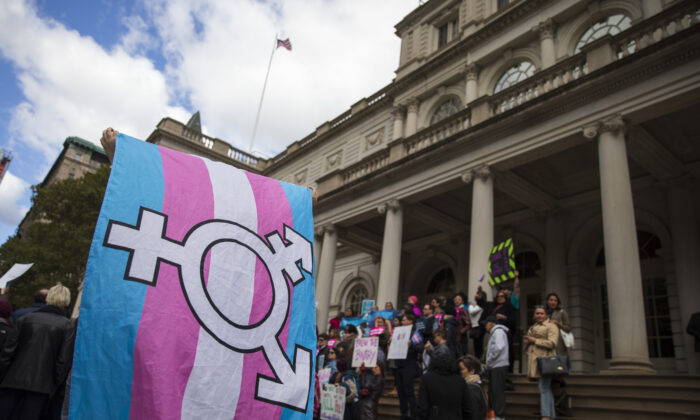 LGBT activists and their supporters rally in support of transgender people on the steps of New York City Hall, N.Y., on Oct. 24, 2018. (Drew Angerer/Getty Images)
Viewpoints

She’s My Mother—She’s My Father

If you’ve seen the 1974 movie “Chinatown,” you may recall that great scene in which detective Jake Gittes (Jack Nicholson) confronts Evelyn Mulwray (Faye Dunaway) about the identity of the woman he believes is Evelyn’s father’s mistress.

“She’s my daughter and my sister.”

Spoiler alert: Mulwray was raped by her father when she was 15. The young woman, Katherine, is, in fact, not Evelyn’s father’s mistress, but she is both Evelyn’s daughter and her sister. It can be confusing to unpack this scene.

Fast forward to today, to real life, and not a Hollywood film or make-believe, with the very confusing news story of a transwoman physician. Dr. Jesnoor Dayara, in Gujarat, India, has frozen his sperm so that when he undergoes sex-reassignment surgery sometime later this year, the child he hopes to give birth to as a woman will be biologically his.

It can be confusing to unpack this story, too!

Dayara’s claim is, while he was born male, he has always felt like a woman. He feels he was “born in the wrong body.”

Let us be clear on a few fundamental points on human biology and human sexual reproduction:

I recently wrote about a new study done showing that the majority of transgender women will want uterine transplants so that they can more fully express their feminine characteristics, such as menstruating, getting pregnant, and giving birth.

The new wave of the “modern family” with men having babies, which is a movement of gay men actually not having babies, but rather buying eggs from one woman and renting the womb of another woman, so that they can delude themselves into thinking that they had the baby.

In fact, one case concerning a “throuple” of dads is making news as the judge has allowed the three to be listed on their son’s birth certificate. Of course, we know three men can’t make a baby, but this little boy was born via assisted reproduction using the eggs from one woman and the womb of another.

No mention of the genetic mother or the birth mother on this birth certificate, #WomenErased again and another child without a sliver of an identity or idea of where he or she came from.

And now, we’re looking at a world where we will be told to live with Dayara’s fantasy of transwomen having babies, lest we are called transphobes and become canceled.

But what about the children born with all these strange new ways and into this new version of what family looks like? Are the kids all right like Hollywood and the media want us to believe? The sad answer is, probably not.

I like to say this is one of the largest social experiments of our time, with our learning as we go. What studies we do have show that the children aren’t necessarily all right, and they are searching for and finding, thanks to DNA testing, their biological parents and half-siblings. Adults are getting what they want, with little consideration of the best interests of the children.

And if and when Dayara is able to give birth using his sperm, using a uterine transplant, with estrogen rushing through his male body (he will still have XY chromosomes and will be biologically male in every cell of his body), what effect will this all have on any children produced this way?

Jennifer Lahl is the founder and president of the Center for Bioethics and Culture and producer of the documentary films, “Eggsploitation,” “Anonymous Father’s Day,” “Breeders: A Subclass of Women?” and “Maggie’s Story,” and “#BigFertility,” which was an official selection in the Silicon Valley International Film Festival. She is back behind the camera, producing a film on the ethics of allowing children to medically and surgically transition.