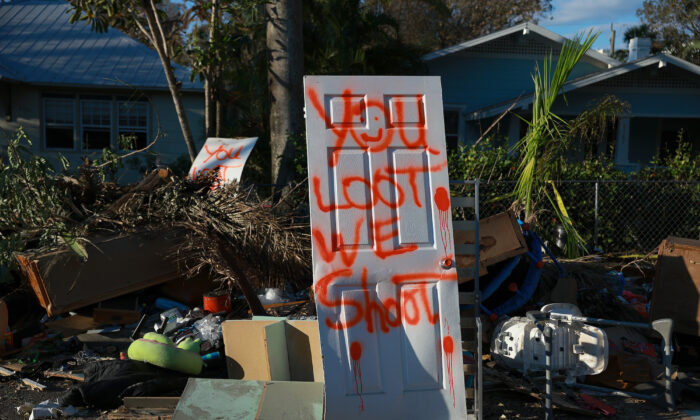 The message that hurricane-ravaged Florida is an inhospitable place for looters was driven home by an outspoken Polk County sheriff, who in a media appearance on Friday urged Floridians to shoot looters breaking into their homes so they look “like grated cheese.”

Polk County Sheriff Grady Judd issued the warning during an Oct. 7 appearance on “Fox & Friends,” while commenting on the problem of looters preying on vulnerable households in the wake of Hurricane Ian’s devastation.

“I would highly suggest that if a looter breaks into your home, comes into your home while you’re there to steal stuff, that you take your gun and you shoot him,” Judd said.

“You shoot him so he looks like grated cheese because you know what? That’s one looter that will not break into anyone else’s home and take advantage of them when they’re the most vulnerable and the most weak,” the sheriff added.

It comes as parts of Florida face a long road to recovery following the hurricane while opportunistic thieves look to take advantage of the chaos.

Florida police have made several arrests in connection with looting activity, including a group of illegal immigrants.

Besides being on guard for looters, Floridians should watch out for fraudsters. The National Center for Disaster Fraud (NCDF) has issued a related warning, calling instances of criminals targeting hurricane victims with scams like trying to get them to invest in non-existent recovery efforts a “despicable and inexcusable crime.”

‘Carried Out in a Pine Box’

The Polk County sheriff said that disasters like the Category 4 hurricane that left a swath of destruction in its wake strengthen community ties—which criminals try to undo.

“If there are looters that think they are going to take care of these people, they may break in, but they should be carried out in a pine box because that is unacceptable,” Judd said.

‘You Loot, We Shoot’

At a press conference in Fort Myers, DeSantis remarked about seeing a sign directed at would-be looters displayed at a business in nearby Punta Gorda that read “you loot, we shoot.”

“They boarded up all the businesses, and there are people that wrote on their plywood, ‘you loot, we shoot,’” DeSantis said. “At the end of the day, we are not going to allow lawlessness to take advantage of this situation.”

“We are a law-and-order state, and this is a law-and-order community, so do not think that you’re going to go take advantage of people who’ve suffered misfortune,” the governor added.

The epicenter of the hurricane’s devastation was in Lee County, where the storm made landfall.

The death toll from the storm as of Oct. 7 was at least 101, according to a tally by The Associated Press.

Officials estimate the hurricane caused billions of dollars in damage.