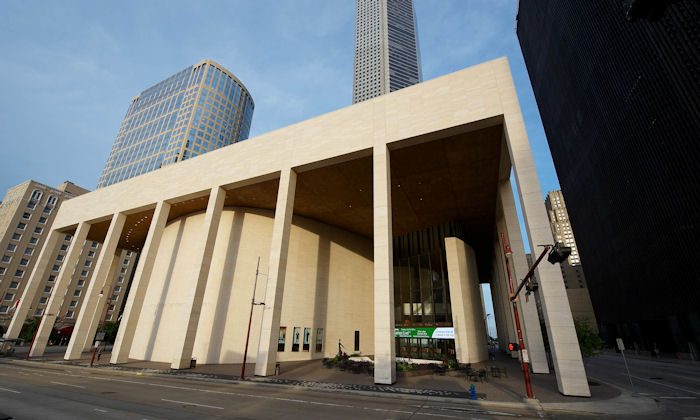 Mr. Lawrence, a Harris County Judge, was touched by the precision of the dancers as well as the digital backdrop. The dancers “obviously worked very hard and [are] very talented,” he said. “It’s just been a wonderful performance. I was particularly impressed with the scenes where performers seem to morph into the background. I thought that was very clever, very technically innovative.”

Shen Yun’s state-of-the-art digital backdrop serves as an extension of the stage, which transports audiences to a world where heaven and earth are one, according to the Shen Yun website.

“It’s a wonderful experience,” he said.

Also in the audience was Jeffrey Butler, a physicist at ExxonMobil Chemical Company.

“It’s beautiful, the colors are fantastic, the scene changes,” he said. What really struck Mr. Butler was the history of classical Chinese dance, and the length of time that this ancient art form has been around.

“Things more than thousands years older or more , I don’t know anything about it,” he said. “It’s pretty neat.”

Shen Yun’s genuine presentation of China’s divine culture also amazed Francisco Vacas. He said that the “most important aspect of the whole show is the expression of Chinese tradition, and culture, and the music.

He added that he was fascinated by the unique “way it’s being performed—the dance—and the way the dresses and costumes are designed, and the expression of the faces of the artists.”

Mr. Vacas, manager of health, safety, and environmental protection at Eni, an energy and oil firm, has done research on the different cultures of indigenous people and their environments. But for all of the ancient culture being presented in Shen Yun, the spiritual connection was most dominant for Mr. Vacas.

“It’s clear to me the intention to express the deep spiritual feeling primarily in the songs,” he said. “There was always sense of a spiritual part to it, something from a magical power that brings in all these traditions, all these dances, all these histories into today.”

Mr. Vacas added that because of his own spiritual understandings, the inner meanings contained in the performance were more readily available to him.

“I think the message for some could be clear,” he said. “It takes someone with deep spiritual belief to figure out the message. For me, it’s immediately.”

As far as the inner meaning of higher spirituality, Mr. Vacas sensed it through the dancers as well. “I think that was also a way the dancers were expressing themselves,” he said.