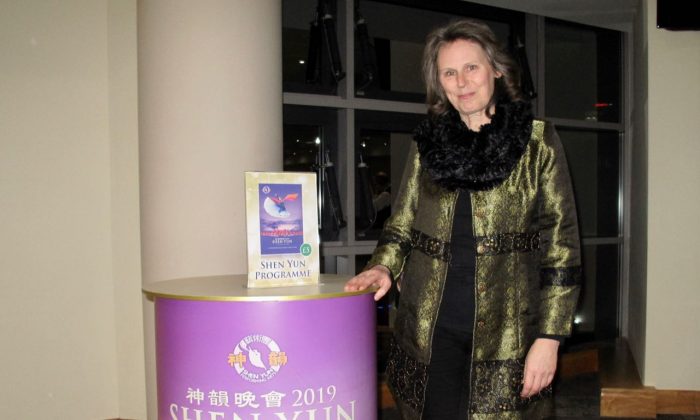 “Sometimes it was so beautiful it moved me to tears,” she said. “The dancing was just so flowing, and just beautiful.”

Langstone, a music teacher, saw Shen Yun perform at The ICC, Birmingham. She described the lyrics of the tenor as “spot on.”

“The message, it’s exactly the message we need. Coming down from God,” she said.

She referred to a piece called “The Way That Saves,” sung by tenor Tian Ge. Shen Yun singers are trained in the traditional bel canto method, and when they perform, they are able to maintain Chinese diction.

Shen Yun was formed by artists from around the world in New York in 2006, who have a shared mission to revive 5,000 years of Chinese civilization. It’s a culture that has almost been wiped out in modern day China under the communist regime.

Through classical Chinese dance and a live orchestra that blends music from the east and west, Shen Yun is restoring this nearly-lost culture on stage, transporting the audience to different dynasties.

“It’s lovely to bring the past to the present,” Langstone said.

Langstone, who traveled around China in the 1980s, said she felt sad to hear about the suppression of traditions in modern day China. She was touched by one of Shen Yun’s pieces set in the present day that portrays a story of persecution in China, based on true events.

Despite the sadness, she was touched by the goddess depicted on stage near the end of the scene.

“It really opened my heart,” she said.

“The story when she was receiving the healing from the goddesses, it is a lovely feeling, you are healed as well when you watch it. It’s drama isn’t it.” she said.

Through exploding athleticism as well as gentle movements, Shen Yun dancers can convey a wide range of emotions. The artists perform classical Chinese dance, which is one of the most expressive art forms in the world.

“Grace and purity and innocence and beauty—that came through,” said Langstone.

She said it’s important to remember the traditional Chinese culture, as well as our own cultures.

“It is a celebration and we should all be proud of our history,” she said.