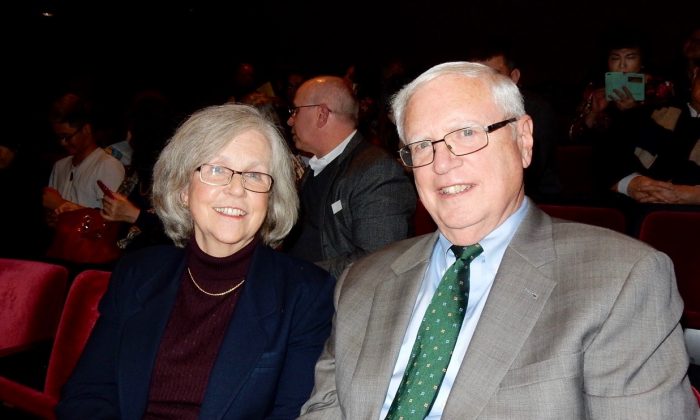 Jim O’Brien noted the sensual beauty of the colorful costumes and the extremely well executed dance performed by this premier classical Chinese dance and music company.

As Mr. O’Brien looked at the intricacy of the dance and heard the explanation provided by emcees introducing the pieces, he realized the enormity of what he was seeing:
“This is part of a system that goes back for millennia, for thousands of years. Really, I think that makes it even more special, and more interesting,” he said.

New York-based Shen Yun relies on classical Chinese dance—a dance form that emerged over thousands of years and is able to express rich characterizations and meanings—to tell stories, starting at the beginning of Chinese civilization on through to the present day.

Behind the intricate beauty of the dance that acts out the meaning, it “really delivers a message as equally as if you could do with words,” Mr. O’Brien said.

Starting with a dance showing the creation of the divinely inspired Chinese culture, Shen Yun proceeds to show the troubled times in China today. These dances show people of faith who are oppressed under the official atheism of the communist regime. Yet, despite the struggle, the very last dance shows hope for the human spirit to triumph.

“Whenever you see something that celebrates the human spirit and the spirit being able to rise …, that has to make you feel better,” Mr. O’Brien said.

“It is inspiring that people rise out of adversity,” Mrs. O’Brien agreed, adding that it is what we would all hope for mankind.

Ms. Cowart felt the whole experience took viewers on an emotional journey via the stories, the colors, and the music.

As a singer, she enjoyed hearing the Chinese language sung while the lyrics were projected in English behind the vocalists.

She felt the voice of the baritone, Qu Yue, was spectacular, but stated that, honestly, no one person stood out for her. “I keep looking for one that speaks to me most because that’s what we do as performers, right? One that says ‘ah!’ But they’re all so incredible, I don’t find my eyes just going to one person.”

Instead, the whole sensory experience captivated her. The whole performance really “awakens the emotions in everyone,” she said.

“The colors and the dancing and the messages are what’s speaking to me tonight.”

Beneath the beauty, she too saw buried wealth in Shen Yun’s message. “This world is just this world and you can’t take it with you so you need to be in it and you need to be present, and all of these things that we work so hard for, the pain and the suffering, is just a temporary state.”

And she found that message inspiring. It told her “that we need to be grateful.”