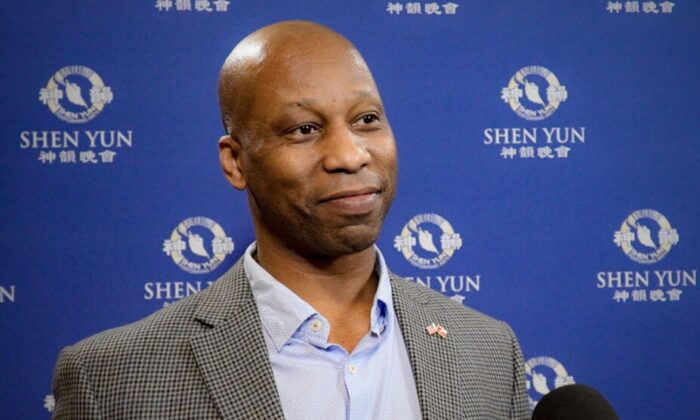 Chester Wilson III at the George Mason University Center for the Arts, in Fairfax, on Jan. 22, 2023. (NTD)

“A very exhilarating event, something that more and more people should come to check out,” he said, “very eye-opening.”

Mr. Wilson and his family attended the matinee performance at the George Mason University Center for the Arts on Jan. 22.

“I think it’s awesome … we had a great time,” he said, “the dancers, they were very high energy, very entertaining, and worked well together.”

Based in New York, Shen Yun Performing Arts is the world’s premier classical Chinese dance company. Along with folk dances and solo performances, the production depicts story-based pieces that tell tales from ancient times to the modern day. According to the company’s website, the presented heroes embody the most exalted virtues of Chinese civilization and convey morals still relevant to the modern day.

The age-old culture has been on the brink of extinction since the Chinese communist regime seized power in 1949. Shen Yun says its performance this year demonstrates “China before communism.”

“When you come to events like this, you never know what you’re going to get,” said Mr. Wilson, “but the fact that [Shen Yun] was centered on an ancient custom of doing right, doing good, and that there is a higher being … the idea that there is a savior, that salvation is free … is what impressed me the most.”

“As a matter of fact, atheism … only detracts from the goodness that God has brought us,” he added.

China was once known as “The Land of the Divine” and Shen Yun presents this culture by drawing upon the Middle Kingdom’s Buddhist and Daoist philosophies. As such, the performance often includes spiritually uplifting messages, according to the company’s website.

“Every country has its own unique flavor, traditions, and customs and the more we bring those things out, the better it is for the whole world,” said Mr. Wilson.

Addressing the Shen Yun performers, he added, “continue the good job, and continue to bring this event all across the world!”