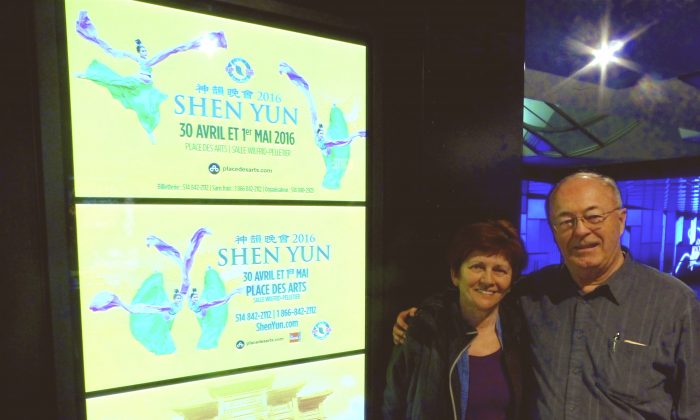 Retired professor Pierre Giroux and his wife, Janine Routhier, attended Shen Yun at Place des Arts in Montreal, Canada on May 1, 2016, and were deeply moved. “It was magnificent,” said Mr. Giroux. “It was the essence of the human expression that was approaching the divine.” (Mathieu Côté-Desjardins/Epoch Times)
Canada

Shen Yun ‘Touches the Divine Element in Us,’ Says Professor

MONTREAL, Canada—Shen Yun Performing Arts achieved the highest potential of a true art form for Pierre Giroux and his wife, Janine Routhier, who found the production a profoundly moving experience.

“I was very moved by this performance, which was magnificent from all points of view, and something that I have rarely seen—it was truly an expression of the body that touches the divine element in us,” said Mr. Giroux, a retired math and accounting professor who attended the May 1 performance at Place des Arts.

“From the beginning, I had a feeling of greatness. It was magnificent. It was the essence of the human expression that was approaching the divine.”

Ms. Routhier said she had a feeling of almost melting into the performance, caught up in the surreal beauty and spiritual energy onstage.

“I told myself, ‘This divine element that I feel in the performance, I am part of it,'” she said. “It’s inspiring, very inspiring.”

“As an audience member, one felt at one with the creative movement of the dance and the divine in ourselves,” added Mr. Giroux. “It was a kind of unity that manifested itself through the eyes, through the feelings.”

New York-based Shen Yun has been inspiring audiences since 2006 with its revival of 5,000 years of divinely inspired Chinese culture. Performing classical Chinese dance and music, the artists take audiences on a journey of what China once was—and what they hope it will be again.

For thousands of years, Chinese culture was rooted in spiritual philosophy from Buddhism, Taoism, and Confucianism, which permeated every aspect of society. When the communist regime came to power, however, it launched a systematic campaign to destroy not only cultural sites, temples, and relics, but also the people’s belief in virtue and faith in the divine, says the Shen Yun website. This semi-divine culture is what Shen Yun aims to restore, through art forms passed down from the ancients.

“It’s a performance that touches on a lot, a lot of values flowing from the highest realms of one’s conscience—whether it’s values of the heart or values of ‘us’—the ‘us’ in terms of all people, all humans, and the values of closeness and unity,” said Mr. Giroux, who has lived and worked around the world on three different continents.

“It was beautiful to see Chinese people in the audience, who must have been very touched.”

The ideals that make up the essence of traditional Chinese culture—principles like propriety and wisdom, compassion and justice, and divine retribution—were intensely inspiring and resonant, said Mr. Giroux.

“I found it talks to me a lot because it gives me the willingness to change myself, to go further, to be more authentic, more open, to be a more upstanding person, and to be more alive inside and express myself better,” he said.

“It talked of a love for oneself and others, more tolerance,” added Ms. Routhier.

The experience was perspective-changing and deeply enriching, said Mr. Giroux—a reward much greater than the cost of a theatre ticket.

“It’s not an expense to have come to the performance, it’s an investment,” he said. “This performance will stay with me much longer than anything else I could have bought with four times the cost of what I paid for it. That is how I see it, that is what I feel.

“I feel enriched and full of hope. It makes me want to change myself,” Mr. Giroux said.