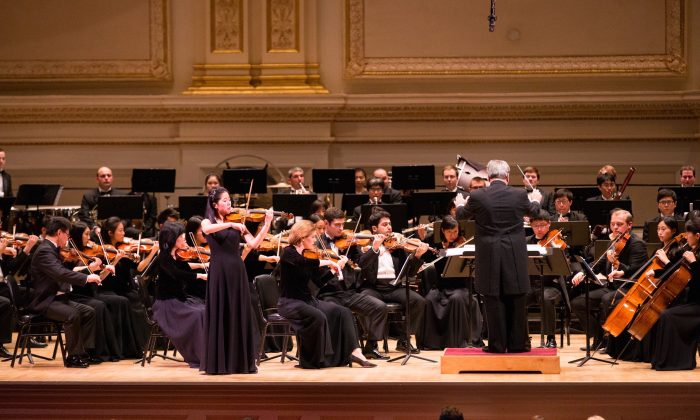 MIAMI—It is not every day one hears an orchestra that has accomplished what no other ensemble has ever done—combining traditional Chinese music, which goes back thousands of years, with classical Western music.

The result was a moving and evocative performance that left audience members at the Adrienne Arsht Center in awe of Shen Yun Symphony Orchestra’s music, and they expressed their enthusiasm in numerous standing ovations during the performance.

“I feel inspired, I feel uplifted, I feel as if they had brought some beautiful, magic music into Miami,” said Ms. Juliana Possi, who attended the performance with her mother. Ms. Possi, an artist who creates electronic music with visualizations, felt she had been treated to a spectacle.

It was absolutely spectacular. The dynamics were perfection. The passion! [When] the violinist came out, the solo violinist, was remarkable.
— Juliana Possi

“It was absolutely spectacular. The dynamics were perfection. The passion! [When] the violinist came out, the solo violinist, was remarkable,” Ms. Possi added.

Audience member Marcella Pazcohen said the emotional effect of the music swept her away to a different place, and she felt at peace.

“I feel blessed, I feel very blessed,” Ms. Pazcohen said. “I was taken away from everything, [and] just very, very thankful to be here. I’m very honored.”

Barry Shoor, an entrepreneur, felt positive emotions throughout the performance but couldn’t quite place his finger on why the music was so touching. “It was very rich and very soothing at the same time,” Mr. Shoor said. “It gave you a nice feeling, a nice emotional feeling.”

It was surprising to some audience members that music so new to them was so touching. Some concertgoers were familiar with traditional Chinese culture, and for some, this was their first encounter.

It is Shen Yun Performing Arts’ mission to revive 5,000 years of traditional Chinese culture through music and dance, and Shen Yun Symphony Orchestra follows in that mission.

Based in New York, Shen Yun was founded in 2006 by a group of artists who came from around the world. Its name translates into “the beauty of divine beings dancing,” which the artists say expresses what they are trying to achieve: “an experience so profoundly beautiful and joyful that it evokes a sense of the heavens.”

“Beautiful artistry,” Ms. Plasencia said. “They played with a passion.”

Perhaps it is the passion being conveyed to the audience members that evokes such emotions. In in-depth interviews on the Shen Yun website, a number of orchestra members explained their art.

“The best music, I think, isn’t just about technique and precision; the best music can communicate a performer’s feelings and touch a listener’s heart. So, as a performer, your own heart has to be wide open,” said Fiona Zheng, the violin virtuoso who performed “Gypsy Airs.”

“You need to be willing to expose your innermost thoughts to an audience of thousands. Because of this, sincerity is extremely crucial,” Ms. Zheng said.

As for what she has in mind when she is practicing and performing, Ms. Zheng is drawing from a traditional meditation practice called Falun Dafa, which teaches truth, compassion, and tolerance. She notes that practice and dedication directly affect one’s craft, as does “God-given talent,” which aligns with her belief that art is a gift bestowed by the gods.

“I believe that when you improve your moral character and constantly elevate your spiritual realm, your craft will improve as well, just as if the divine is guiding you,” Ms. Zheng said.

Soprano Geng Haolan also gave a riveting solo that moved some audience members to tears. For Ms. Geng, the things that make for a great soprano are a correct singing method, good insight, and the power to affect the audience.

But more importantly, “you need a heart that loves music,” she said. “Use your heart to sing, and don’t be superficial.”

“To reach a higher realm as an artist, I think morality plays a vital role,” she said. “It’s about leading a life of integrity.”

After departing from Miami, the orchestra will travel north to Chicago and Boston. The tour’s last performance in the South this season will be in Atlanta on Oct. 27. For information about the orchestra’s other October performances, visit ShenYun.com/Symphony.