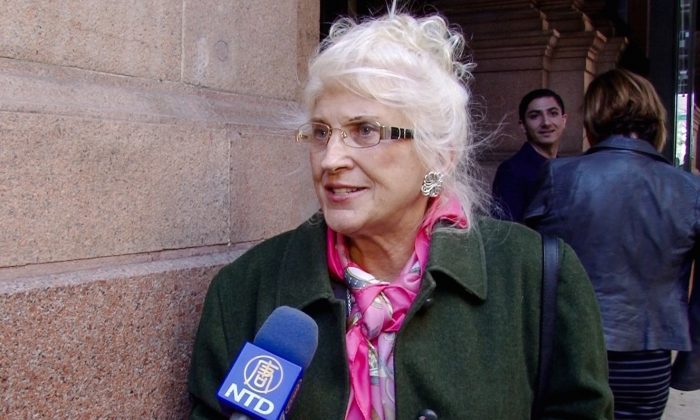 New Yorker Linda Midas, after attending the matinee performance by Shen Yun Symphony Orchestra on Oct. 10, 2015 at Carnegie Hall, said, "I feel like dancing! It was great, it was really wonderful."

NEW YORK—”I was so impressed, it was so bright. The music was bright and beautiful and crisp, and the conductors were wonderful,” said New Yorker Linda Midas after attending the matinee performance by Shen Yun Symphony Orchestra on Saturday at Carnegie Hall.

“I feel like dancing! It was great, it was really wonderful,” she said.

The orchestra received a standing ovation and performed two encores.

The orchestra is unique in the world in that it combines exquisite Chinese melodies with the grandeur of a Western orchestra.

On its website the Shen Yun Symphony Orchestra describes its combination of the two musical traditions: “Traditional Chinese music emphasizes the expression of inner feelings—the ancients always used musical instruments to relate their states of mind. Western music, meanwhile, focuses on the overall effect of the musical ensemble—and to achieve that, arrangement and harmony are of utmost importance. Shen Yun’s music combines these approaches to capture the essence of both East and West.”

“The Chinese instruments … were so clear and so beautiful,” said Ms. Midas.

Ms. Midas said that she was particularly struck by the violin solo performed by Fiona Zheng accompanied by the orchestra.

“Oh my goodness! I’ve been all over … I’ve been to the opera, to everything,and she just took my breath away. I think she’s amazing and accomplished,” she said.

“The violinist just took my heart. That’s how beautiful she played.”

Fiona Zheng, who started playing the violin at age 5, made her solo debut this year by performing Pablo de Sarasate’s “Gypsy Airs.”

In a Q&A on the Shen Yun Symphony Orchestra Ms. Zheng says that: “The best music, I think, isn’t just about technique and precision; the best music can communicate a performer’s feelings and touch a listener’s heart.”

Ms. Midas said that she’ll “recommend this to everyone.”

“It is just a beautiful performance,” she said.