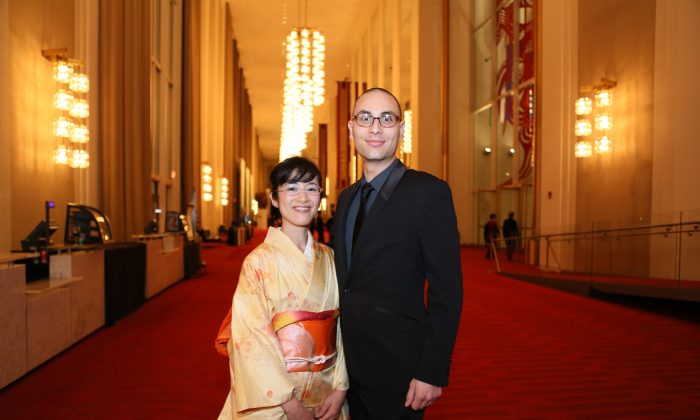 WASHINGTON—For one night at the John F. Kennedy Center for the Performing Arts, the audience was transported through 5,000 years of a divinely inspired culture.

On Oct. 11, Shen Yun Symphony Orchestra played a program of original compositions, featuring instruments like the erhu and pipa to a backdrop of a full Western symphony, classical favorites like Tchaikovsky and Sarasate, and original songs in Chinese, sung by bel canto solo vocalists.

The music was grand, the melodies were majestic, and the audience was enchanted, giving the performance a standing ovation—to which the orchestra played two encores.

“In a grander scale, this music really reaches I think all cultures. It’s a form of art I think helps us unite and bring people together,” said Navy officer Nicholas Matos, who attended the concert with his wife Satoko Kimura. “I really felt that.”

The couple was full of praise for the varied program, listing off the aspects of the performance and saying each was wonderful. Much of Mr. Matos’ feelings were synthesized in the feeling of balance and peacefulness.

In an in-depth interview on Shen Yun’s website, Ms. Fiona Zheng explains her own special connection to music.

“When I was young, if I felt under the weather, listening to music always made me feel better,” she said. “The best music, I think, isn’t just about technique and precision; the best music can communicate a performer’s feelings and touch a listener’s heart.”

“So, as a performer, your own heart has to be wide open,” Ms. Zheng said. “You need to be willing to expose your innermost thoughts to an audience of thousands. Because of this, sincerity is extremely crucial.”

The piece she plays—”Gypsy Airs”—was written by the brilliant violinist Sarasate to really demonstrate a violinist’s skill. On a trip to Hungary, he had been inspired by the folk tunes and fiery dances of the Roma people.

Ms. Zheng has her own interpretation to the classic piece: a helplessness and sadness to the first part, freer rhythms in the second part, and the allegro third part as a lighthearted, joyful dance.

“The interpretation is to be free and the Character of the [Gypsy] Music improvised as much as the ability of the performer will admit,” Sarasate himself wrote in a blurb when the piece was first published. Only a very skilled violinist could say, as Ms. Zheng did, that her favorite part is interpreting the free second section.

“I feel it can reflect my inner self,” Ms. Zheng said in the interview.

She relates personally to the piece. In 1999, the Chinese Communist Party launched a nationwide crackdown on the peaceful spiritual practice Falun Gong, and Ms. Zheng and her family, who had benefited in health and spirit from the practice, were suddenly on the run like the gypsies that inspired the violin piece. She could not understand why the Party would not allow a practice that taught truthfulness, compassion, and tolerance.

Now, in America, she is free to meditate before she performs.

“This helps me a lot more than last minute practicing—it makes my music more powerful, and I can feel the energy flowing from every note,” Ms. Zheng said.

The First of Its Kind

Frank Sodetz, a retired scientist, and his wife Dores could not help but admire conductor Milen Nachev though they had never seen Shen Yun before.

“The conductor had just superb control over every aspect of it. It seemed as though every movement in his hand and body and so on was reflected immediately in some change in the music,” Mr. Sodetz said.

“So, it struck me as a very disciplined orchestra which only comes from very, very hard work over a long period of time and a great deal of talent,” Mr. Sodetz said. “We look forward to their next performance.”

We look forward to their next performance.
— Frank Sodetz

It is indeed very, very hard work, over a long period of time, and a great deal of talent, according to an interview Mr. Nachev gave earlier this year. In a conventional orchestra, he explained, everyone comes from the same school of music. With Shen Yun it is a continuous learning process and everyone is working very closely together to understand the other instruments, how to harmonize the Chinese sounds, and learn all these new compositions.

It is something no other orchestra has ever done before.

“It was absolutely wonderful, and I could not have enjoyed it more,” Mr. Sodetz said.