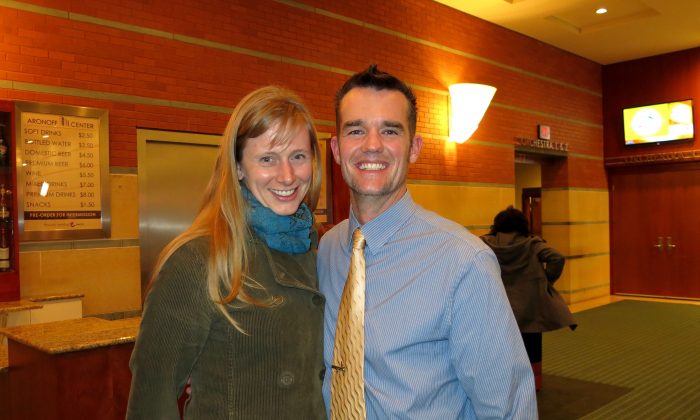 CINCINNATI—Professional violist and violin teacher Kate Cinelli was brightened by the positivity of Shen Yun Performing Arts. In it, she saw intriguing art forms completely new to her.

There was a theme of good versus evil, Mr. Ludwig said, with good triumphing in the end. “A lot of positive messages, which we don’t always get in the Western culture.”

The culture that New York-based Shen Yun brings to the stage is the traditional Chinese culture of 5,000 years. Shen Yun seeks to share this divinely inspired culture—once nearly brought to the point of extinction—with the world again.

Ms. Cinelli noted the “neat mixture” she heard in the orchestra: the ancient two-stringed “erhu” right next to the violins, the brassy woodwind “suona” adding comedy and drama with its distinct sound. The orchestra was quick, the music rhythmic, and overall, it was complex in its creation, she thought. It was mixed, beautiful, and lyrical, she said.

The dance was just as captivating: “It was beautiful dancing, well-choreographed and rhythmically spot on—not a moment when the orchestra or the dancers weren’t totally together. It was really beautiful,” she said.

“Definitely a lot of athleticism,” she said, adding that the dancing was expressive as well, with the artists using their bodies to tell stories in which the positivity came through.

As with many audience members, this was Ms. Cinelli’s first encounter with classical Chinese dance, a form that has developed through the millennia along with China’s ancient civilization. She was amazed at the grace of movement and how it was accomplished in a way unlike the Western dance forms she has seen.

“It always seems like there was a clear positive message and there is almost a whimsical nature, a very fun and bright and lively nature of the characters,” Ms. Cinelli said.

Mr. Ludwig noted the grace as well, adding that he couldn’t get an image out of his mind. In one dance, the dancers were in blue and white, using their costumes and flowing fans in a way that looked like “the sea turning over.”

The costumes are an oft-praised aspect of the performance. Each year, New York-based Shen Yun creates nearly 400 individual pieces for its all-new performances.

Emperors’ dragon robes, the attire of Buddhist monks, and traditional Tibetan dress are just some of the costumes that help tell Shen Yun’s stories from China’s 5,000 years.

Dancers in the audience also often note that the costumes are constructed in a way that allows—or even requires—the dancers to have an extended control of the garment, as if the long sleeves or flowing skirts they work with are an extension of their own bodies.

To top it off, the dancers displayed aerial athleticism that showed just how sports like gymnastics originated from classical Chinese dance, Ms. Cinelli said.

“It was a great combination of everything,” Ms. Cinelli said.