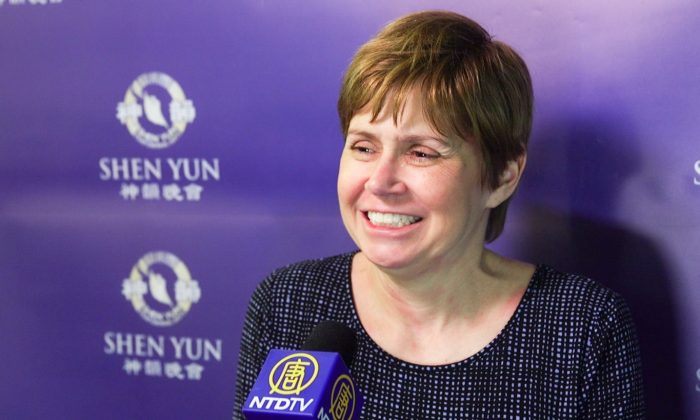 DAVENPORT, Iowa—Shari Boyle thinks we could learn a lot from the Chinese culture—its food, its traditional medicine, its focus on inner peace. Seeing Shen Yun Performing Arts on April 17 only fortified that opinion.

With a daughter who studied Chinese for four years in high school, and having a Chinese intern stay with the family for a while, Ms. Boyle has gained a great love of Chinese culture over the years.

“I love the thought process and their 5,000 years of culture. We have a lot to learn from them,” she said at the Adler Theatre.

She loved the performance by the classical Chinese dance and music company, and said she’d learned even more by watching it.

And she had another connection to the performance. She’s been involved in dance for most of her life, first studying ballet and then buying Moving Props, a national company specializing in custom screen printed apparel and promotional items. Their primary clients are private dance companies.

She noted the precision of Shen Yun dancers, which often astounds audiences. With mostly group dances, people marvel at how such synchronized performances are possible.

“It’s different, of course, than the ballet that I’ve been involved with, but all the same it was … just gorgeous,” she said.

A textile artist was in the audience on April 17, too. But despite Laura Hopkins’s using the word “beautiful” five times to describe what she saw, she did not mention the costumes at all in her feedback after the performance.

She was interested in Shen Yun’s mission: “It’s wonderful to teach people about China’s culture, and a wonderful way to take the message out to try to support China being able to embrace its past without persecution and without fear.”

Shen Yun uses the universal languages of music, dance, and art to show the inner beauty of a culture that was almost completely destroyed under years of communist rule.

The inner beauty of the traditional culture comes from a deep faith in the divine. Values like loyalty, compassion, and steadfast faith have permeated China’s legends, literature, and actual history for the length of its 5,000 year civilization.

In one of Shen Yun’s story-based dances, a man is tortured for standing up for his beliefs. This is based on the current situation in China.

Ms. Hopkins believes that this story is universal: “We all run into spots where we have challenges with—I guess you’d call it a corporate mentality, whether it be government, or it be business, or it be academics. … so I think we can all relate to that feeling, that feeling of fear and being alone and being a victim.”

But by Shen Yun portraying this story with art and grace “makes it much easier to bear as something that others have had to endure. It makes it easier to face it and move on,” she said.

If her years as an artist have taught her anything, it is that “humanity is at its best finding the divine and embracing it.”