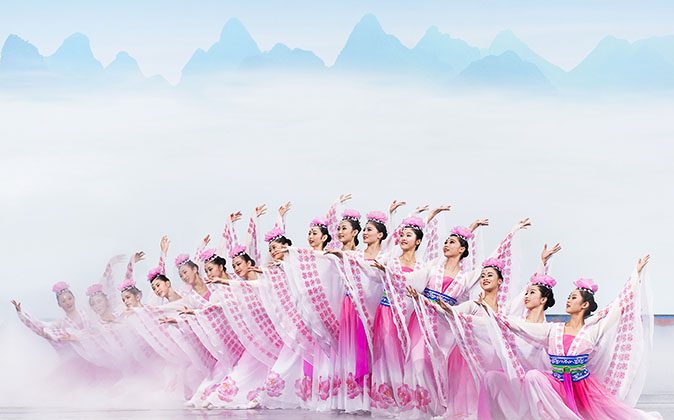 In classical Chinese dance, seemingly simple moves can express complex characters and emotions. A wave of the arm can symbolize veneration for the gods; a turn of the head can convey a profound internal conflict.

This is done through a dancer’s bearing, or “yun.”

Bearing is defined as the inner spirit. It consists of qualities that vary from emotions to breathing techniques to cultural traits.

“Every dancer’s bearing is different,” said Daisy Wang, a principal dancer for Shen Yun Performing Arts. “The bearing of each dance is different too.”

Shen Yun is a classical Chinese dance company based in New York. Since this form of dance has an exceptional capacity to express deep emotions, Shen Yun dancers can depict a myriad of characters from ancient to modern China.

From celestial maidens to Manchurian princesses, Shen Yun dancers use bearing to bring mystical, historical, and modern personae to life on the stages of world-class theaters such as Lincoln Center in New York and Kennedy Center in Washington. Shen Yun will begin its global tour on Dec. 22 in Houston.

There’s more than one Shen Yun dance that features female dancers with silk sleeves, where dancers wear costumes made of long rolls of silk that unfold like rippling water when they perform.

Even though both dances use silk sleeves, the mood in a Tibetan dance is vastly different from a water-sleeves dance.

In the Tibetan dance, the silk sleeves are meant to show reverence for gods. “I think of the unrestricted feeling of life in the Himalayas,” said Wang, who has performed six consecutive tours with Shen Yun.

On the contrary, water-sleeve dances that portray dancers in ancient imperial courts require a more polished aura. “This requires a more dignified bearing,” Wang said. “You’re dancing for the emperor.”

The story-based dances also tell ancient Chinese legends, where performers emulate a variety of fairies and other mythical creatures.

Does the bearing vary for different kinds of fairies? The answer is yes. “Heavenly fairies and undersea fairies have different bearings,” Wang said.

Last season, Wang was a principal dancer in a dance called “The Power of Compassion.” The dance required a bearing that Wang found particularly meaningful.

The dance was set in modern China, where adherents of a spiritual meditation practice called Falun Gong face severe persecution.

It was an important dance to Wang because she is a Falun Gong practitioner herself.

In the dance, Wang played a woman who was beaten by a police officer for meditating. When the officer accidentally shocked himself in the leg with an electric baton, she had a chance to escape.

Instead, she helped the crippled officer. She found the bearing for this character by thinking of Falun Gong’s spiritual principles: truthfulness, compassion, and tolerance.

“I believed that as long as my heart was in the right place I would never be limited,” she said.

The dance concluded with a gesture conveying that forgiveness is more powerful than brute force.