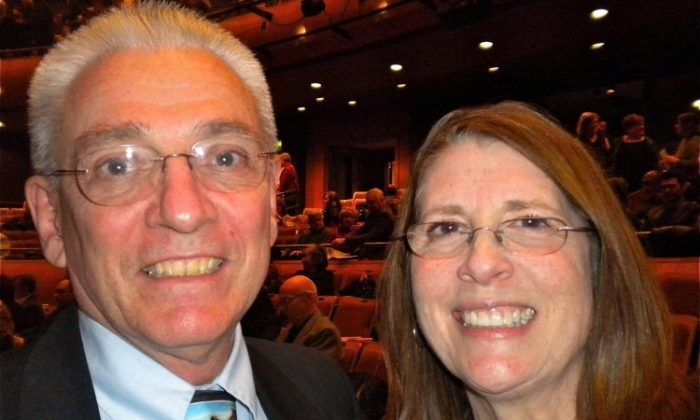 MEMPHIS, Tenn.—The moon was full over the Mississippi River when Shen Yun Performing Arts returned to Memphis on March 6. A warm and friendly couple responded to the spiritual themes in the show, according to Betty Jobbins, who works at the University of Memphis.

New York-based Shen Yun’s mission is to revive the thousands of years of divinely inspired Chinese traditional culture and bring it to the people of the world.

Speaking of tenor Huan Xing, who sang “Break Open the Gates of Delusion,” “when he kept singing that I just wanted to say, ‘halleluiah!’ Mrs. Jobbins said with a big smile.

Shen Yun is “very deep. All the meanings were so deep … spiritual. We liked the spirituality,” said Mrs. Joobin.

“We loved it,” said her husband Michael Jobbins, who has published one book and has just completed another, not yet published. “Back in the beginning of every race and culture there is the same tradition, love and goodness. Truth will break open the gates of delusion.”

According to the program book, the characters of Shen Yun are “about the grace, compassion, and sublime beauty of heavenly realms that are shown through the subtlest expressions and gestures of our dancers.”

Mrs. Jobbins marveled at the unity of all the artists, she said. “The orchestra and the dancers seem like they’re moving as one, like one person. They are just so in sync, synchronized, or in sync with each other, it’s really amazing.”

The first piece in the Shen Yun Touring Company’s 2012 show is An Era Begins. It conveys a theme of a contest between good and evil. Mr. Jobbins liked the imagery. “I liked the story of the Emperor of Heaven chasing the dragon!” he said, and laughed with pleasure.

Speaking of the same dance, Mrs. Jobbins said, “Good versus evil and good wins out; you know, we liked that, we like happy endings.”

She said she felt the Shen Yun artists were “showing me an epic tale that I have never seen before. It’s very unique.” The experience was thrilling, she said.