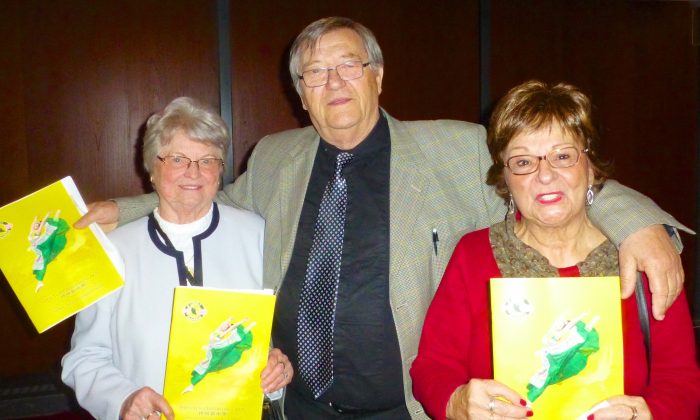 Shen Yun Journeys From the Heavens to the Cultural Roots

MONTREAL, Canada—It began on a cloud in the heavens where celestial beings gathered to come to Earth. Over the course of the next two hours, Montrealers were given a sweeping look at 5,000 years of a divinely inspired culture.

Shen Yun Performing Arts, which finished its three-show run at Place des Arts on Sunday night, was founded on a mission to revive that culture. Those who saw the show Sunday afternoon, May 1, gave it warm recommend.

Dentist Milena Simicic and University of Montreal biochemistry professor Luis Rokeach each said they were touched by the artistry of the performance as well as its underlying spirituality.

“It’s fantastic, just amazing, the coordination. I would recommend it,” she said, adding that “it was very spiritual.”

Chinese culture was once rooted in the traditions of Buddhism, Taoism, and Confucianism, and society in general had a deep respect for the divine and a belief in virtues like compassion, filial piety, and self-refinement.

But an ongoing tragedy in China that has continued since the communist revolution in 1949 is the modern-day repression of similar beliefs, which are dealt with in some of the dances of Shen Yun.

“The messages that they are sending, is of freedom, love, peace,” said Ms. Simicic.

Her friend Mr. Rokeach praised the precision of the choreography as well as the colours of the costumes and of Shen Yun’s animated digital backdrop.

“It’s very moving to see how they dance and also the message they are translating by their movements,” said Mr. Rokeach.

‘That touched me tremendously’

Shen Yun uses vividly animated digital backdrops to extend the range of the stage, setting dances in past dynasties or heavenly realms. It is an experience that many audience members commented on.

“It seems like pictures sometimes when they open the curtain, and it is very beautiful. And the girls seem like they float in the air,” said André Donato.

Ms. Loh was astounded by the breadth of the culture.

“It’s almost unbelievable … already so advanced with everything in China … 5,000 years ago,” said Ms. Loh.

When each were asked how they would describe the show in a few words, Ms. Dupuis praised it as being “very colourful, perfection in the movements, athletic,” and Ms. Boucher use the words “talented and harmonious.”

“The beauty. I found that was touching,” said Ms. Dupuis.

She said she was deeply touched by the beauty and the perfection of the movements.

“It made me cry. I found beauty in the movements, and also complexity. It’s something that I’ve never seen,” she said.

“That touched me tremendously. I think it’s something I will never forget,” said Ms. Boucher.