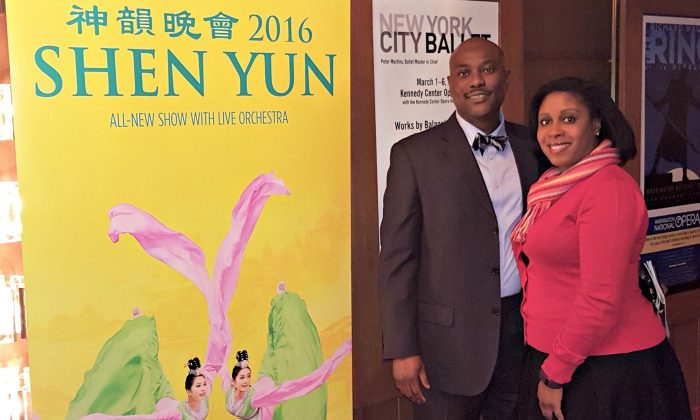 WASHINGTON, D.C.—When Gabriel Thompson, a physician, went to see Shen Yun with his fiancée Lashawndra Scroggins for the first time at the Kennedy Center Opera House on Feb. 19, he expected an ordinary performance of song and dance.

What he saw was extraordinary: “I think that even if I watch it for the second time, it’s going to be even more powerful for me. I didn’t expect it,” he said.

“They have the commonality about how fragile the pursuit of worldly things are. If you embody that sense of authentic integrity, the truth and transparency and all that spiritual things embody, like eternity, that absolutely gives power,” he said.

Each of the Shen Yun’s individual songs or dances highlights some cherished value of traditional Chinese culture—compassion, loyalty, kindness or bravery—often by telling a story, sometimes through the singing of award-winning vocalists.

In the story “Hope for the Future,” a group of students of the traditional meditation practice Falun Dafa is persecuted by the Chinese communist regime and their books are confiscated.

The portrayal of the heavens opening and then a higher power returning the book, I think it’s powerful.
— Gabriel Thompson

“They took the books away from them. It looked like it was gloomy. But even then he did not let go, and it was just something that he believed in. So I believe that spiritually is believing it and pursuing it. And ultimately there is a higher power. We did see a higher power emanate. The portrayal of the heavens opening and then a higher power returning the book, I think it’s powerful,” said Dr. Thompson.

However, according to the portrayal of Falun Dafa by Shen Yun, there is hope, which is also something Dr. Thompson believes in.

“To use the whole cultural experience and the oppression and the theme of hope and overcoming, and the color schemes and the gold background, it means a lot to me. It shows there is light at the end of the tunnel,” he said.
Reporting by Valentin Schmid