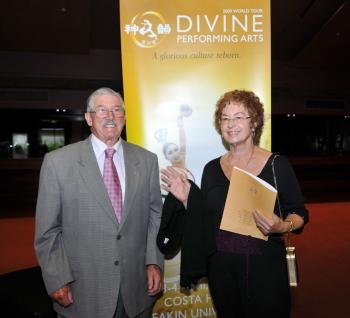 Former Finance Manager: ‘It was striking’

The lavish show of China's 5,000-year-old heritage portrayed in Chinese classical dance and music, debuted at Costa Hall in Geelong, Victoria, the state's second largest city behind the capital Melbourne, once known as the gateway to the goldfields in the 1800s.

Ms. Barrett attended the presentation with a friend, Mr. Williams, who said, "I thought it was beautiful. Immaculately dressed the people, they were lovely."

Shen Yun Performing Arts Company, based in New York, has at its foundation China's divinely inspired culture. Integral to its production are story-based dance, music, and vocalists.

Speaking of the ancient stories told through song and dance, Ms. Barrett said, "I think anything that they put together like that is worth studying. I couldn’t see anything wrong with it at all."

As for the costumes, he reiterated, "Yes, I said immaculate."

Ms. Barrett said emphatically. "They were outstanding, outstanding. I was looking at those particularly, because I could see how well they were—not a mark on them. Beautiful, very outstanding."

Ms. Barrett had never seen a show like Shen Yun and was awestruck by the demeanor of the world-class performers.

"It’s the first time, so it was interesting to come to see this. I’ve never seen anything like it before. I’m quite taken aback with them, because they're such lovely people. I was so taken aback by their personality. I’ve never met anyone like them before," she said.

Not knowing what to expect, the production had exceeded her expectations, and she said she would tell people about her experience.