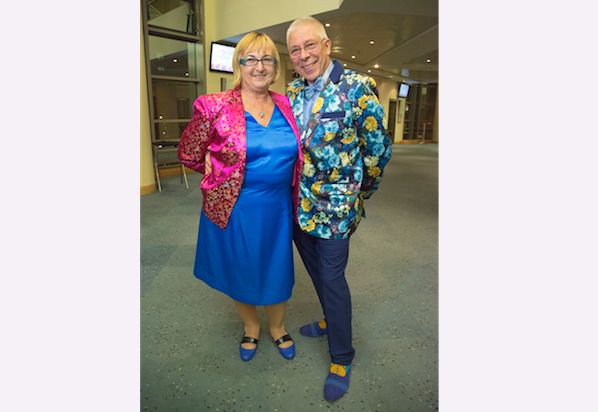 BIRMINGHAM, United Kingdom—Shen Yun Performing Arts World Company brought colour, peace, and energy to the city of Birmingham through its two full house performances at the International Convention Centre (ICC), on April 14 and 15.

Attracting people from all over the Midlands area with the mission to revive 5,000 years of divine Chinese culture, New York-based Shen Yun did just that.

Shen Yun has at its heart classical Chinese dance, which with its comprehensive system of forms and postures, combined with spectacular spins, flips, and jumps, is one of the most expressive systems of dance in the world. It is ideally suited for presenting stories of myths and legends, and courage and heroism, from ancient China to the present day.

“The story in dance was very clear; I think the production is well done,” Mr. Hurr said. “I think it made it special to see lots of Chinese people in the audience as well. I would recommend anybody to come and see it because we will be back next year! It’s a superb show, so highly recommended.”

In many of the dances, the performers move synchronously with each other, creating dazzling displays of colour and movement.

“I’ve not seen a show like it before,” said Mrs. Hurr. “The dancers are just moving with one another, they’re just gliding across the stage as one, they’re just so together.”

Mrs. Hurr was also struck by the beauty of the handmade costumes. “The dresses and the costume are so delicate, the colours and materials of them just floating,” she said.

A signature of every Shen Yun performance is the digital animated backdrop that the dancers interact with.

“With state-of-the-art graphics technology, Shen Yun’s digital-backdrop team creates vividly animated settings, extending the stage and transporting the audience to a world where heaven and earth are one,” says the Shen Yun website.

“It was incredibly well done. That was superb, it was seamless,” said Mr. Hurr. “People disappeared and off they went into the air.”

Mrs. Hurr agreed. “You’re somewhere else. You’re not sitting watching a dance and performance, you’re where they are. I think it took you back to probably where the Chinese were many years ago, their culture and how it was for them. That’s how I felt about it.” she said.

Retired accountancy consultant Alan Cooke and wife Maria agreed that the backdrops added to the performance. “It’s brilliant staging. I love this impact of something coming in from the skies and the next minute jumping up on the stage,” said Mr. Cooke.

“It is the synchronisation as well, the timing, I love it,” said Mrs. Cooke. “It’s full of colour. It’s astonishing. I think people around the country would love this.”

‘Everything we wanted it to be’

The ICC is the U.K.’s premier purpose built convention centre. Its design and construction had a significant impact on the industrial city of Birmingham, according to the centre’s website.

Almost 3,000 people attended Shen Yun’s performance during its two-night run at the ICC.

Murad El-Anis, a business development manager at Rolls Royce, found the performance “very emotional.” He attended the Tuesday night performance with his wife, speech therapist and special educator Dalia Hesham. “It was a fantastic show, we both thoroughly enjoyed it. I think we would love to come back and see another performance,” he said.

“It was absolutely breathtaking and amazing,” said Ms. Hesham.

Chinese culture is said to be divinely imparted, according to the Shen Yun programme book: “China was once known as the Divine Land, its glorious culture said to have been brought down from the heavens. But under the last 60 years of atheist communist rule, this divinely inspired culture has been almost completely destroyed.”

Many of the story-based dances performed by Shen Yun retell tales of wisdom from Buddhism and Daoism, with moral lessons that are still relevant to today. These same principles of good and evil, justice, compassion, and loyalty can also be found in modern-day settings, where in today’s China, practitioners of a traditional spiritual meditation practice known as Falun Dafa face persecution by the Chinese Communist Party.

This is depicted in the dance The Steadfast Lotus, in which a mother and daughter practise their Falun Dafa exercises in the park, only to be separated by Communist Party police.

“The way they presented it in the show was very, very touching. It really, really gave me tears as soon as I’d seen the first part of it, especially with the mother and daughter in the park, that was very touching, and it’s very sad,” said Ms. Hesham.

“With the background information and with this visual that we had tonight it was very, very moving and emotional.”

Similarly, for Keith Walker, who has just retired from running a charity in Africa helping provide music, education, and health care, “the Buddha at the end was the ultimate finish to the programme, [because] it brings peace and it came over to me as a very emotional experience.”

His wife agreed that the show was fabulous. “It was everything we wanted it to be,” she said.