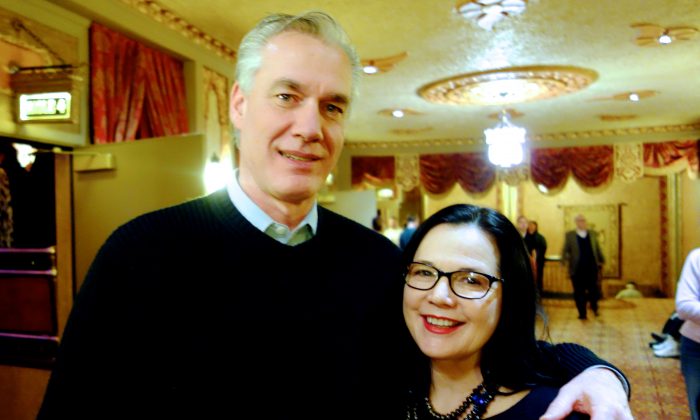 KNOXVILLE, Tenn.—After seeing what Shen Yun’s program calls the classical Chinese dance combinations of “leaps, turns, flips, flips, spins and other aerial and tumbling techniques,” attorney Daniel Kidd joked at intermission: “Oh yes, we do that at home all the time.”

Mr. Kidd is a candidate for Judge of the Fourth Circuit Court of Knox County. His daughter gave him and his wife tickets as a Christmas gift.

His wife, an abolitionist and human rights activist, was glad to see the contemporary history in Shen Yun.

“I just thought it was really interesting that they were brave like that,” said retired art therapist Deni Kidd. “I know it’s America, but still, it’s a brave statement. I love it. They are strong like that.”

She spoke highly of the dance The Steadfast Lotus in Shen Yun’s Jan. 8 performance at Tennessee Theatre. In it, a “perfect moment is shattered when Communist Party police arrive,” according to the program.

She said, “I thought that it was great they made it part of the show. Awareness is a good thing.”

Mr. Kidd also noted the pure entertainment value and liveliness of Shen Yun. He laughed and said, “I would describe it as, it’s like watching a martial arts movie without the violence.”

According to the Shen Yun website, “Chinese martial arts and classical Chinese dance can be thought of as twins conceived 5,000 years ago by the earliest progenitors of Chinese culture. Although spawned from the same roots, these siblings with vastly contrasting personalities served very different purposes.”

It adds that “classical Chinese dance entertained dignitaries of the imperial court as a performing art.”

After the performance, a pretty woman kissed her companion on the cheek and thanked him for a wonderful birthday gift. “It was amazing. I’ve looked forward to this show since I heard about it, and seen advertisements in the paper, and been so excited. And it’s beautiful, beautiful. It blew me away. I cried,” said Ginny Helms, a surgical technologist.

Devin Day, a retail department head, said, “She was saying it touched her emotionally, and I know her very well. And there were just points that she was so blown away I could feel her breath catch, and I was just in awe. It had something that I think just spoke to everyone.”

Ms. Helms added that she felt grateful to the artists for visiting Knoxville, when they go to other top cities like New York, Paris, and London. “Just to have them come here was really a gift, and I’m just so glad we got to see the show.”

A group of friends, all of whom are health professionals, came from a nearby town to see Shen Yun. “I was so impressed, absolutely impressed,” said Carolyn Novkov, a health practitioner. “It was exquisitely beautiful; it really touched me very deeply.”

Ms. Novkov’s friend, Nicki Mercurio, also wanted to thank the performers for visiting Knoxville “so we could see perfection, because it really was impressive.”

“We get a very limited perspective through our media regarding what’s going on in modern day Chinese government,” she said. “I really appreciate their ability to express and to share the deeper elements of their culture with us through this expression.”

The audience at both shows gave the artists a standing ovation, cheering and applauding.