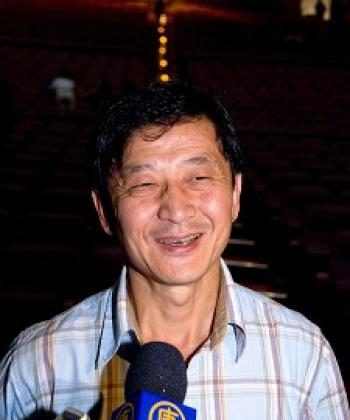 By Amy Hsu and Fangru Li
Print
CHIA-YI, Taiwan—Tsai Erhhsin, administrative vice-superintendent of the Zuyuan Internal Medical Hospital, attended the show of Shen Yun Performing Arts in Chiayi, March 11, in the company of his daughter, mother, and other relatives.

Before Mr. Tsai would agree to be interviewed, he insisted on taking the time to seat his mother.

He said then in delight, “The whole performance is well defined by its name Shen Yun, rich in the manifestation of a semi-divine culture imparted by gods. The dancing, in combination with diverse backdrops, has reached the acme of perfection. In addition, the blend of classical music and modern music produces an attractive effect and is deeply etched in people’s minds.

"The dancers’ dancing skills are flawless; their efforts to perfect their dancing are noticeable. What touches my heart is that their dancing affects people in various ways. Solos by the tenors and sopranos have been woven into the program, which have never been seen in other performances. As the saying goes, ‘One-minute performance onstage is a result of ten-year practice offstage.’ The performance is really terrific!”

The plot of the performance, he continued, is presented as a coherent whole to soundly present five millennia of ancient Chinese culture; the presentation is really touching. Meanwhile, the theme of each single program leaves positive effects on audiences. He said that the performance transported audiences to another realm and touched their innermost feelings; no any other performing group could achieve these effects.

The performance, he explained, left him feelings which could never be expressed in words. He considered the performance valuable and unique.

He also mentioned that his little daughter had just finished reading the story of the Tang Monk’s journey to the west. The program The Monkey King Triumphs not only touched adults but also fascinated children.

Mr. Tsai’s mother next to him also kept praising the show, too. “It’s very wonderful! Very touching! The dancer’s hard work results in a perfect presentation.” She said that her other son had watched the Shen Yun performance in New York and highly recommended it to them.