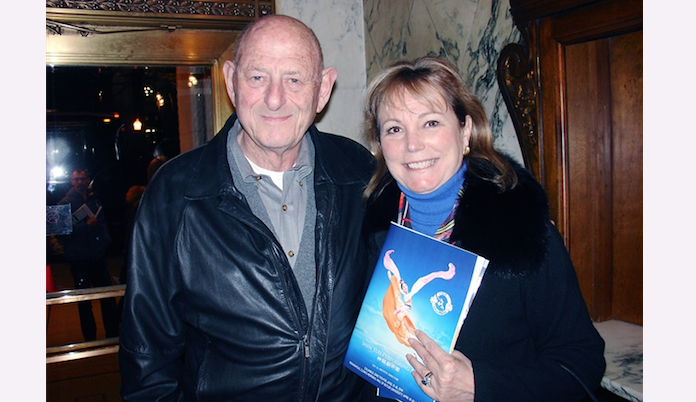 'Giving meaning to the lives of other people'
BY Epoch Times Staff TIMEApril 17, 2014 PRINT

COLUMBUS, Ohio—“I found it was very uplifting,” said Jared Nodelman a retired businessman in banking and real estate. And that is “because of the beauty, the effort of the people, the performers, and the dedication to bring this beautiful music and inspiring thoughts to other people,” he said.

He is referring to Shen Yun Performing Arts Touring Company that had just finished its first of two performances at the stately Ohio Theatre, on April 15.

Both he and his wife, Marcia, deeply enjoyed Shen Yun.

“I loved the costumes and how it mirrored the scenery in the background,” said Ms. Nodelman, a insurance broker. She also loved “the graceful dancing and the wonderful culture that was shown.”

Shen Yun’s mission is to restore traditional Chinese culture and its spirituality through the performing arts. Through story-based dancing, orchestral music, vocal soloists and digital animated backdrops, Shen Yun transports the audience into 5,000 years of divinely inspired civilization and its associated morals and values.

It is a culture that has been almost completely destroyed by communist rule. But, due to Shen Yun being New York-based, the company has the freedom to express these traditions fully.

Mr. Nodelman appreciated the performance. “I loved the show because I felt that spiritualism and the beautiful costumes and music, and, through a beautiful culture that unfortunately in the West we don’t appreciate. But I was very happy to be exposed to it.”

He found inspiration from the evening’s program in “things that are greater than ourselves that give meaning to life—the beauty and music.”

He explained further: “Everyone in this world faces the same destiny [as] no one lives forever. We have to find some purpose in our life beyond the immediate. And if you can and find beauty, helping others and inspiring other people to face their challenges, you have done a wonderful job.”

He saw these attributes in Shen Yun. “Bringing this beautiful music and the people who dance and the costumes and the effort is creating a healthy and better world, and giving meaning to the lives of other people.”

The Nodelmans know firsthand about helping and inspiring others in their community. They have established the Marcia and Jared Nodelman Charitable Trust.

“I am just very thankful [Shen Yun] was here in Columbus so that we could experience it,” Ms. Nodelman said.