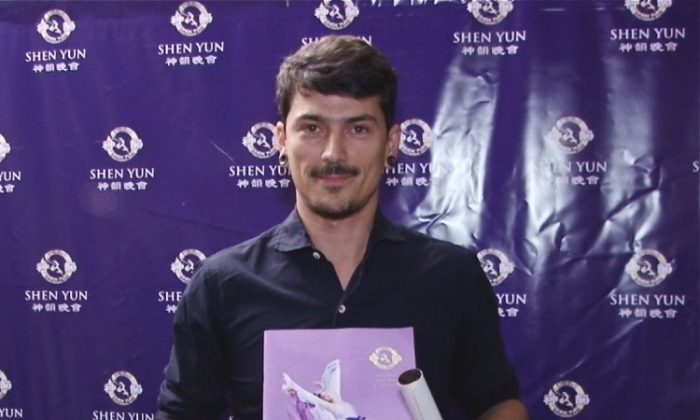 Alex Scaleira said, "Since I had contact with Shen Yun I found a completely new world,” after seeing Shen Yun Performing Arts for the second time at Teatro Ópera Citi. (Courtesy of NTD Television)
News

BUENOS AIRES—”Emotionally, I forgot where I was, who I was, I forgot everything, because I connected with the beauty of all they show.”

That was Alex Scaleira after seeing Shen Yun Performing Arts for the second time at Teatro Ópera Citi.

“Yes, I saw it twice. Today I saw it closer, and I had, I don’t know, the experience is even more intense,” he said. “It’s magnificent. Since I had contact with Shen Yun I found a completely new world.”

Shen Yun, based in New York, was formed in 2006 by a group of overseas artists who wanted to restore and revive traditional Chinese culture after the culture was “all but demolished” after more than 60 years of communist rule in China, according to Shen Yun’s website.

“However, the deeper spiritual core of the ancient culture, with its values of benevolence, honor, propriety, wisdom, and sincerity, as well as a reverence for the gods and the heavens, cannot be destroyed,” explains the website.

To say the performance left a profound impression on Mr. Scaleira would be an understatement.

“How does oneself feel? Connected to another world, a divine world,” he said.

The revival and preservation of the traditional culture is important, Mr. Scaleira said, while noting Shen Yun’s effort to share China’s ancient history with the world while keeping it alive—and “not let[ting] something so beautiful and divine like this disappear,” he added.

Shen Yun’s performance starts with a core of classical Chinese dance, one of the oldest arm forms in the world, and the dancers are adorned with handcrafted regalia.

Then other components are added in harmoniously—digital backdrops, sopranos and tenors, and an orchestra that melds both classical Western and traditional Chinese instruments.

“Sophisticated dance techniques, an orchestra joining instruments East and West, beautiful costumes, and a stunning back drop—this is Shen Yun at first glance,” says Shen Yun’s website. “But digging deeper, one discovers a sea of traditional Chinese culture. Mortals and divine beings merge on stage as one. Principles such as benevolence and justice, propriety and wisdom, respect for the heavens, and divine retribution, all come to life, washing over the audience.”

Mr. Scaleira felt transported to another world during the performance, one reason why he saw the performance twice. He said it awakens his curiosity while captivating him.

Additionally, he took away a sense of hope after seeing Shen Yun.

“Because it has three companies and it’s growing now,” he said, “And that means that the way they are spreading the message works, and as it grows it’s effective.”

“It’s a total hope because one leaves from here with that feeling I think I have, to want to contribute and help to keep it alive. all that is alive, right?”

Mr. Scaleira will without a doubt recommend the performance to people he knows.

“You have to see it, you can’t miss it,” he said. “And what one leaves with from here is a treasure.”