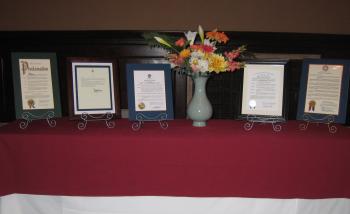 Shen Yun Performing Arts International Company is scheduled to premier this evening at Cleveland’s Playhouse Square for one show only.

“It draws on the expression of Chinese classical performance to showcase true traditional Chinese culture, devoid of any elements of Chinese communist culture,” Mr. Jackson said.

Shen Yun is one of three companies currently scheduled to appear on its 2010 World Tour in more than 100 cities performing some 400 shows. The two other companies are touring in Europe and in Australia.

Mr. Jackson appreciated that Shen Yun was brought to Cleveland by the Ohio Oriental Culture Association and Ohio Falun Dafa Association, endorsed by his colleague Mr. Clough “for contributing to our area’s reputation as a cultural center.”

Mr. Clough wished the company “much success in the future as they continue to bring the very best of traditional Chinese culture to our community,” he said.

Shen Yun comprises a group of leading artists who share in a vision of cultural renewal bringing together over 100 of the world’s foremost classically-trained Chinese dancers, choreographers, musicians, vocalists and an orchestra that blends both Western and Chinese instruments using only original composition.

A resolution was passed from the Cleveland city council members to support both mayors in their decision to proclaim May 29 as Shen Yun Performing Arts Day.

“Cleveland is extremely honored to be among those cities hosting this phenomenal show which represents a true renaissance of classical Chinese culture,” the council president, Mr. Sweeney said.

Ohio State Senator Shirley Smith, as the senator from Ohio’s richest concentration of art collections and institutions, gushed with enthusiasm in her letter of welcome.

“I recognize the important role the arts play in the community,” she said. “I am thrilled that the Shen Yun Performing Arts group will be performing in Cleveland, and it is an honor for the city to host such a spectacular event.”

“This evening’s performance promises to be an unforgettable tribute to the 5,000-year history of Chinese culture,” Mr. Brown said.

He commended both the Cultural and Falun Dafa associations “for bringing this important cultural event filled with music and dance to Cleveland to celebrate Chinese culture as well as entertain, educate, and enrich the audience.