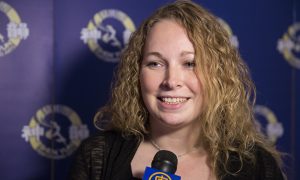 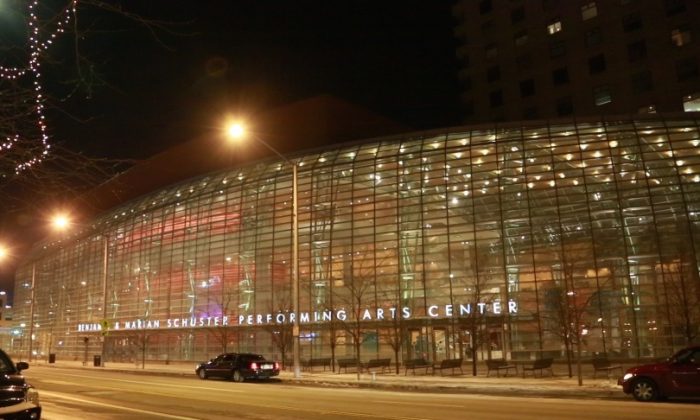 Shen Yun Brings Everything Together Beautifully

Not having any idea what to expect, Ms. Johnson, the owner of Kitchens By Design, found it absolutely, incredibly beautiful.

She and her sister, realtor Marsha Osman attended the evening performance of Shen Yun Performing Arts Touring Company on Jan. 27.

Shen Yun is a New York-based dance and music company that has four companies that tour the world simultaneously.

Using classical Chinese dance, digital interactive backdrops, and a full orchestra, Shen Yun endeavors to revive the 5,000 years of China’s ancient culture through the fine arts of music and dance.

More specifically, China’s myths, legends, and history are brought to life on stage through story-dances.

According to Lydia Denslow, finance manager for Synchrony Bank, the stories told during the performance were “truly beautiful and moving, very moving and emotional,” she said.

Ms. Denslow and third-grader, Sophia Shenk were also among the enthusiastic theatergoers in attendance this evening.

From the music, to the dancing, to the costumes, Ms. Denslow felt that everything was just beautiful, amazing, and lovely.

Ms. Denslow commented, “The last movement, the last song was truly inspiring and beautiful, and it brought tears to my eyes. It was beautiful, it really was.” Miss Shenk said she enjoyed it because it was a sign of courage.

Both agreed that Shen Yun was amazing and worth seeing again, even more than 100 times according to Miss Shenk.

‘It was just wonderful to see’

Being very impressed by this evening’s performance as a whole, Peggy Fout, a retired elementary school teacher, said, “I’m going to remember the beauty forever.”

One of the segments of the program The Power of Compassion, shows a glimpse of modern China and how many spiritual believers, even in this day and age, are still persecuted for their beliefs.

Referring to that segment, Ms. Fout stated, “The three principals that they gave about compassion, and kindness, and everything, well those are what should rule the world—the way of life for anyone that would make a better life.”

Ms. Fout said that before seeing Shen Yun, she didn’t realize what a rich background the Chinese people have.

“Oh it’s phenomenal,” Cathy Johnson said of the dancers. “You can tell the training has to be intense … yes, they’re just magical. They flow and it’s just beautiful, so it’s not anything we knew what to expect and we’re so very glad we came.”

Her sister described them as beautiful, artsy, colorful, and just amazing.

“The special effects with the screen—just magical. So we’re very impressed,” Ms. Johnson said of the digital backdrops and how the dancers interact with it. “It’s like it’s real. And you know it’s not, but they just seem so real and it’s beautiful.”

Ms. Johnson commented, “The music flowed so well with the movements that are on stage, so it just ties together very well. It’s intricate, yet seamless. It’s totally enjoyable. You hear different nuances of all kinds of—you know, music and instruments, it just blends very beautifully.”

Ms. Osman agreed, being uncertain what to expect, she expressed her amazement and how impressed she was with the soprano, her piano accompanist, and that the music overall was fabulous.

Ms. Johnson said she felt both impressed and jealous. Jealous because she wished she’d taken up dance as a child and impressed by everything as she felt it all tied together giving a beautiful presentation.