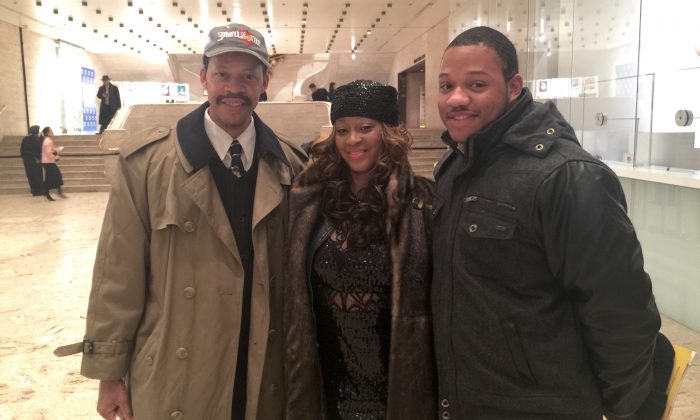 Garry Hunter (L) stands for a photo with his sister and his son after seeing a performance by Shen Yun Performing Arts at the David H. Koch Theater at Lincoln Center on Jan. 15, 2016. (Joshua Philipp/Epoch Times)

NEW YORK—The values of kindness and joy are universal, and Garry Hunter, a preacher, said he saw these values in the Jan. 14 performance of Shen Yun Performing Arts at the David H. Koch Theater at Lincoln Center.

“I was laughing. I smiled. Nobody saw me smile but God,” he said. “It made me smile to see the joy that they were projecting.”

Shen Yun is a performance of music and classical Chinese dance that features, according to its website, “a wondrous tapestry of heavenly realms, ancient legends, and modern heroic tales, taking you on a journey through 5,000 years of Chinese culture.”

China was once known as “Shen Zhou,” or “The Divine Land,” and its culture was rooted in a respect for heaven. These values were at the core of its dance and music, yet were nearly lost under close to 60 years of communist rule.

These elements of Chinese culture can’t be shown in China today, but being based in New York, Shen Yun is able to present these traditions. It was formed in 2006, and its award-winning choreographers, dancers, and musicians have set out revive China’s divinely-inspired culture.

Mr. Hunter has been preaching at a maximum security prison in Upstate New York for close to 20 years, and said he felt a common thread with the traditional values put on display by Shen Yun.

Though Shen Yun was presenting his beliefs through a different culture, “All of us stem from the same thing—a wise and sovereign God,” he said.

“I love how they implemented some divine connection,” Mr. Hunter said, noting some of the ancient Chinese stories where people are given tasks by divine beings.

“Once you find out what your task is, what your purpose is, and you perform it well, it’s excellent,” he said. “Some people choose not to perform because they don’t believe, but I love what they were projecting—that they are believers.”

Mr. Hunter said he plans to use some of the messages in the performance when he’s preaching, noting “the material was excellent.”

“I will tell all a lot of my friends about it, took pictures of the poster, and I will say go see this, it’s fantastic,” he said.

Mr. Hunter was joined at the performance by his sister, Terri Hunter, who works at Grand Central Partnership; and his son, Jonathan Hunter, who is a pre-school teacher.

Ms. Hunter said she was tapping her feet throughout the show. She said “I thought it was very fantastic … it was really entertaining.”

Jonathan Hunter shared the enthusiasm. “It just brightened up my day and put a smile on my face. It was really good,” he said. “You can see a lot of joy in that performance.”