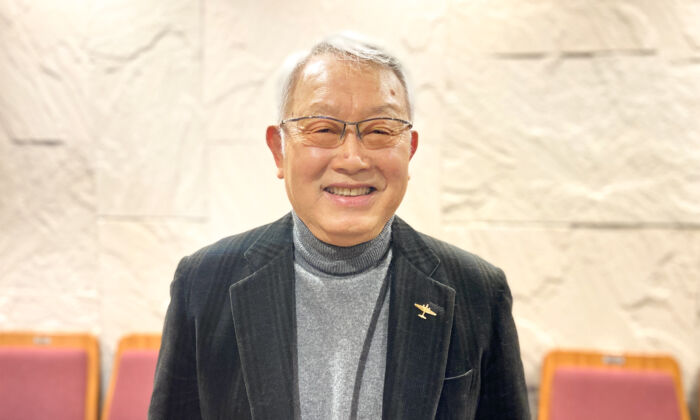 UTSUNOMIYA, Japan—A former Japanese company’s board member said Shen Yun awakened people’s longing for God, and he felt that everybody might come to the earth from heaven.

Mr. Fukaya Yukio was a board member of a famous Japanese transportation company. He attended Shen Yun five years ago and felt very lucky that he could attend Shen Yun Performing Arts again at the Tochigi Prefecture Cultural Center in Utsunomiya on Jan. 22.

“The opportunity of attending Shen Yun is one rarely obtained. The performance met my expectations,” he said with joy.

Mr. Fukaya said he was impressed when the curtain first opened, and he saw a glorious world presented before his eyes. Soon, he was taken by the dancers’ skills and techniques.

“All dancers must have very strict training. They coordinated perfectly and danced like one person,” he said. “They are so talented. I just enjoyed the dances without any concern about whether they could make the very difficult movements or not. They are really masters of their craft.”

Mr. Fukaya felt a special connection to the story-based dances.

“Suddenly, I felt like I went back to my past life, entered a completely different society, a different world,” he said. “I felt we human beings have experienced this long history and finally arrived today.”

Mr. Fukaya understood from Shen Yun that faith brings people the encouragement to face difficulties and the motivation to live actively.

“Not only the emperors are reincarnated from heavenly beings to humans. We all came from heaven,” he said, sharing his understanding of the performance. “People all have a longing for God, and Shen Yun awakens this longing.”

New York-based Shen Yun is the world’s top classical Chinese dance company. It has a mission to show the beauty and goodness of the 5,000 years of China’s civilization. Chinese culture was built on values and virtues from the spiritual teachings of Buddhism, Taoism, and Confucianism, virtues like loyalty, propriety, wisdom, justice, and benevolence—values that are universal and shared the world over.

‘You Experience the Stories Yourself’

“It’s beyond expectations. I was shocked. It’s really magical,” he said. “I have never seen a performance like Shen Yun. It’s huge but very well coordinated.”

Each Shen Yun performance features a cast of around 100, with around 40 dancers and 40 musicians, and a whole wardrobe of over 400 meticulously designed and carefully crafted costume pieces.

“The female dancers moved very smoothly, like water. These movements are very elegant and perfectly show feminine softness and grace,” said Mr. Takada. “They cooperated with each other seamlessly while presenting what was most exquisite. I kept on asking myself: ‘How can they do it?’”

He said the dynamic backdrop was very well designed. It extended the stage to a broader, wider, and deeper space. With the live orchestra playing, “you don’t need any words. You feel you are there [on the stage] and you experience the stories yourself,” he said.

Mr. Takada is also a person of faith. He said he was very happy to see Shen Yun reviving the traditional Chinese culture, in which people should respect divine beings and follow moral codes.

“I’m very emotional now. It’s hard to describe how grateful I am,” he said. “People need these traditions. Then people can live peacefully and support each other. I’m excited to attend Shen Yun.”

Ms. Hayashi Tomoko is a ballet teacher. She was impressed by the classic Chinese dance, as well as Shen Yun dancers’ abilities to “communicate with audiences via dances.”

“They must work very hard to dance so well-coordinated,” she said. “After watching them, I have a big interest to know traditional Chinese culture.”

Ms. Hayashi said she admired Shen Yun dancers because they communicated directly with the audience.

“Such as people should believe in divine beings, Shen Yun conveyed this concept very clearly. I felt it very strongly, which is really good,” she said. “I hope in my future work, I can use this communication skill that I learned from Shen Yun.”