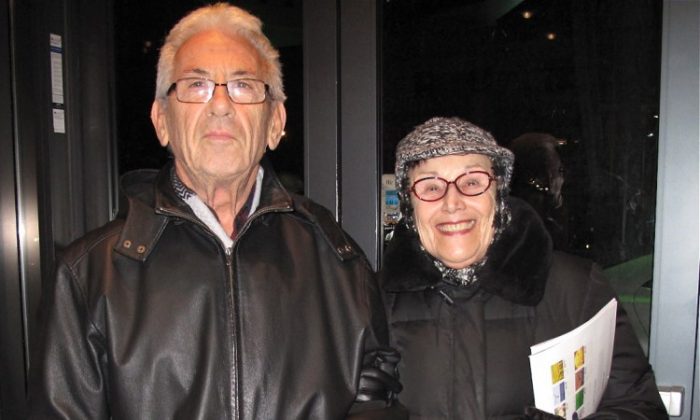 MISSISSAUGA, Canada—Shen Yun’s presentation of 5,000 years of traditional Chinese culture impressed Garry Goodman, a chartered accountant from Mississauga who watched the evening performance at the Living Arts Centre on Saturday.

Shen Yun Performing Arts is based in New York. The company tours the world on a mission to revive Chinese traditional culture, which includes values like “benevolence and justice, propriety and wisdom, respect for the heavens, and divine retribution,” according to Shen Yun’s website.

“I think what should come from this is a lot of people coming together, the East and the West should join and should learn from it,” Mr. Goodman said.

Mr. Goodman was accompanied by his wife, Shirley Goodman, who showered the show with praise.

“I loved everything!” said Mrs. Goodman, an English-as-a-second-language teacher.

“Every movement was precise and the costumes were breathtaking,” she said.

According to the company’s website: “The designers stress harmonic balance and contrast. Their objective is an authentic presentation of the attire that comes from China’s divinely inspired traditional culture, and a consummate stage effect.”

The performing group also includes an orchestra that combines classical Western instruments with traditional Chinese instruments like the erhu, pipa, and gong.

“The music was fantastic. I’ve never heard … so much beautiful Chinese music. I liked it very much,” said Mrs. Goodman.

She was most impressed with the solo performance by erhu virtuoso Xiaochun Qi.

“She was fantastic! … the sound that came out of such a small instrument was really astounding. Terrific,” Mrs. Goodman said.

‘From beginning to end it was amazing’

Karm Hans, a naturopathic doctor who practices in Toronto, watched Shen Yun at the Living Arts Centre with her family on Saturday evening.

“It was much better than I ever could imagine,” Mrs. Hans said.

“From beginning to end it was amazing. The dances were so wonderful. It was beautifully choreographed,” she said.

Mrs. Hans said that not only did she enjoy the artistry but also the stories told through the dances.

“In these economic times it’s important to be surrounded by beauty, surrounded by things that we’re grateful for, and I really appreciated the social aspect of the show,” she said.

Every Shen Yun dance is accompanied by vivid high-tech backdrops that depict Chinese scenery, celestial empires, or include lyrics for the songs during bel canto performances.

“The songs were beautiful and the graphics were so lovely. I wasn’t expecting any graphics whatsoever, and the fact that there were Chinese songs and we could follow it because we had a translation,” Mrs. Hans said.

“I definitely would come back again,” she said.