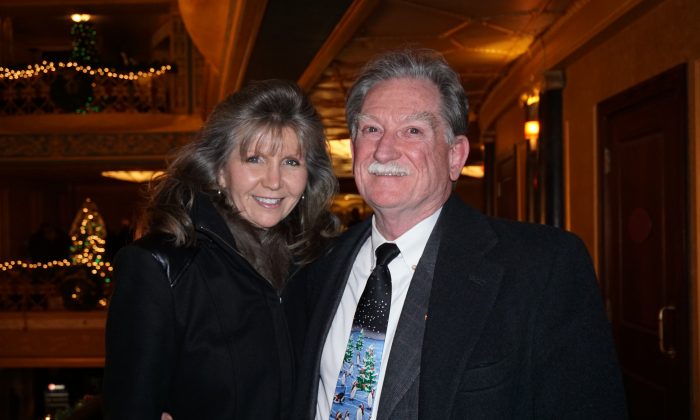 Sandy Monroe, CEO of Monroe and Associate, with his wife, Sue Monroe, at the Detroit Opera House on Jan. 1, 2016. (Nancy Ma/Epoch Times)

DETROIT—Sandy Monroe was not expecting the rich color, the movement, or the vista that would take his breath away when the curtain rose at the Detroit Opera House in the opening scene of Shen Yun Performing Arts’ 2016 production.

CEO of Monroe and Associates, Mr. Monroe and his wife, Sue, were treated to this “perfect gift” and night out by their employees.

Being well-traveled, and somewhat of a dance and opera aficionado, Mr. Monroe thought the classical Chinese dancing was graceful, elegant, spectacular, very inspiring, and like nothing he had ever seen before.

The skill level of the dancers, according to Mr. Monroe, was outstanding and the preciseness was perfect.

“I’m very happy and very impressed. I have a very, very small tolerance for imperfection. You can ask my wife; she’ll tell you,” he explained.

His strongest impression was a state of happiness. Even in some of the pieces with a more serious tone, he said he still came out feeling happy at the end.

Mr. Monroe felt the dancers’ coordination with the orchestra was perfect.

“It’s not like anything I’ve ever seen,” he kept on saying. “I’m very picky and I was very, very impressed.”

Mrs. Monroe was stunned by the preciseness and the accuracy of the performance and felt that the dancers’ energy level was outstanding. She was also amazed by the costumes and the props which she describes as a complementary aspect that just “accentuated the beauty that was already there.”

“Throughout history almost every culture looked toward the divine for inspiration. Art was meant to uplift, bringing joy to both the people who created and experienced it. It is this principle that drives Shen Yun performers and their art,” states the Shen Yun website.

Overall, Mr. and Mrs. Monroe felt the performance was very uplifting, from the dancing, to the singing, to the spirituality.

As for the spirituality, Mr. Monroe believes that because there are many common themes, it “will resonate” with and be universally accepted by those who believe in God, a Creator, or a supreme intelligence.

Describing color to a blind person is how Mr. Monroe said it would be like to describe Shen Yun to his family and friends, so he will instead just tell them “it’s phenomenal” and to just go see it.