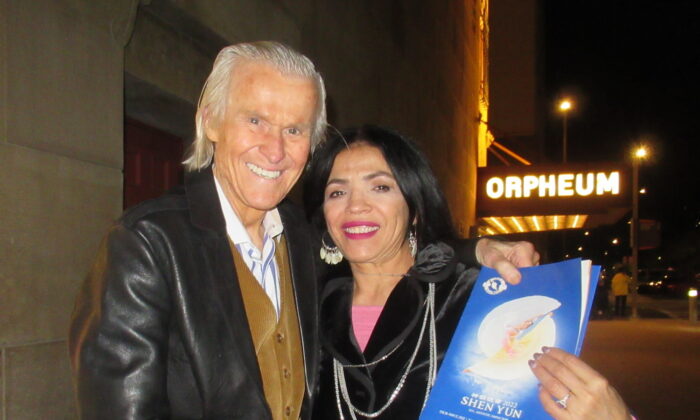 PHOENIX, Ariz.—Professional dancer Zohra Lack and her husband John Lack were in tears from the evening’s performance. Shen Yun moved them in ways hard to articulate. They saw the March 4 performance at the Orpheum Theater.

“It was amazing; it was everything,” Mrs. Lack said, sobbing. “The costume, the beauty, the music, the people working together.”

“In tears, no words, inspiring, touching,” Mr. Lack said, also wet-eyed. “It makes me want to be a better person.”

Shen Yun is a New York-based classical Chinese dance and music performance that has performed across the world annually since 2006.

The Lacks live between New York, where Mrs. Lack teaches dance, and Phoenix. They have known about Shen Yun for 3 or 4 years, and now that she’s finally seen Shen Yun, Mrs. Lack says she can finally report back to her friend in New York who’s already seen Shen Yun twice.

“Tonight I have to tell her it was amazing too,” she said.

Melissa Green, a dancer with Southwest Valley Theater, was captivated by the talent and artistry of the dancers.

“It was very graceful, very divine, really lovely. It could really feel the passion behind how they dance. It was extraordinary,” she said.

For 5,000 years of Chinese culture before the communist takeover, spirituality was the center of civil life. Shen Yun brings back this heritage, something that Ms. Green felt deeply.

I really felt the presence of God during that time. It really spoke to me so that was very lovely.
— Melissa Green

“I really felt the presence of God during that time. It really spoke to me so that was very lovely,” she said. “We all need more God in our world today so that was refreshing to see them singing and talking and dancing about God.”

She loved being in a theater with other art lovers, especially after a pandemic that kept so many isolated.

“I felt joy during the whole time,” she said. “I feel very positive and I’ll definitely return again.”

Oil painter David Starbuck and his wife, sculptor Jeri Starbuck, hail from Tuscon. Mr. Starbuck said Shen Yun is “positive and full of life,” and Mrs. Starbuck said that she was refreshed after having seen it.

The colors filled the auditorium. When the lights came on, it was beautiful.
— David Starbuck

Mr. Starbuck loved the colors in the performance.

“The colors filled the auditorium. When the lights came on, it was beautiful,” he said. “The colors, the dedication to the dance and everything is fantastic!”

Referring to a traditional Chinese dance using ‘water-sleeves,’ Mrs. Starbuck found it fascinating how the dancers used their costumes to convey feeling, such as “how they used their sleeves, being just able to put them out and retract them, the control!”

They loved discovering the spiritual nature of Chinese culture through the songs and stories featuring faith.

“I love the old history from any culture, having the knowledge of it and keeping it alive; I think that’s wonderful,” added Mrs. Starbuck.