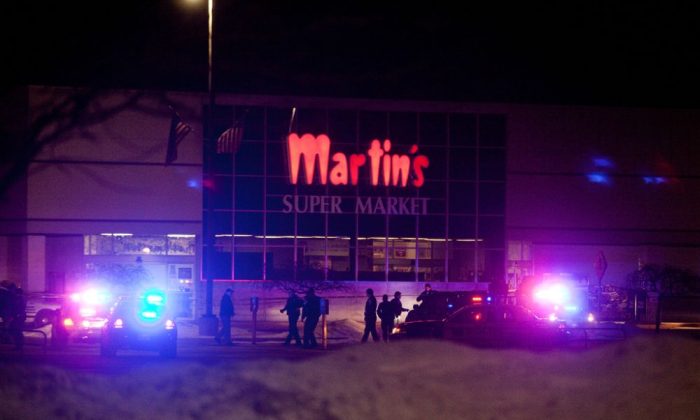 Emergency personnel respond to a shooting inside Martin's Supermarket in Elkhart, Ind., late Wednesday, Jan. 15, 2014. A man fatally shot two women inside the grocery store and was lining up to shoot a third person when police officers tracked him down and killed him, authorities said. Elkhart police received a call about a gunman at Martin's Super Market about 10 p.m. Wednesday, Indiana State Police Sgt. Trent Smith said Thursday. The 22-year-old gunman used a semi-automatic handgun to shoot and kill a 20-year-old employee and a 44-year-old shopper, Smith said. The victims' bodies were found about 12 aisles apart. (AP Photo/The Elkhart Truth, Jon Garcia)
US

Shawn Walter Bair was identified as the suspect in the shooting that left two people dead at Martin’s Super Market in Elkhart, Ind., it was reported.

Bair, 22, was fatally shot by police after the incident, local media reported.

A motive has not been determined yet.

AP update of the shooting:

ELKHART, Ind. (AP) — A man fatally shot two women in a northern Indiana grocery store Wednesday night and was lining up to shoot a third person when police officers found him in an aisle and killed him, authorities said.

The 22-year-old man used a semi-automatic handgun to shoot and kill a 20-year-old employee and a 44-year-old shopper, Smith said. The victims’ bodies were found about 12 aisles apart. Indiana State Police identified the gunman as Shawn Walter Bair of Elkhart.

Smith said two police officers responding to the scene heard a gunshot as they entered the near-empty store. They dashed to that area and found the shooter pointing his gun at a third person. Smith said the man then aimed his gun at the officers and that’s when they shot him dead.

Smith applauded the officers’ swift response, saying there was no doubt they saved lives.

A large knife was found near the gunman’s body, he said.

No further details about the victims have been released, but Smith said there was no indication that the shooter knew the victims.

“At this time, it appears that it’s just random,” he said. He did not elaborate.

State police were investigating the incident because the Elkhart Police Department was involved in the shooting, Smith said.

“We do have a lot of things to look at as far as video surveillance,” Smith said, noting that state and city police were also interviewing witnesses.

“The entire Martin’s family is saddened by this tragedy,” company president and CEO Rob Bartels said in a news release.

“Our thoughts and prayers go out to the families involved and the entire community,” Bartels said.

Elkhart is in far northern Indiana, just south of the Indiana-Michigan border, and about 15 miles east of South Bend.