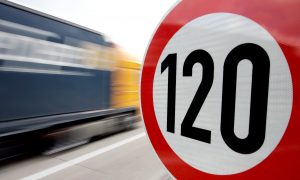 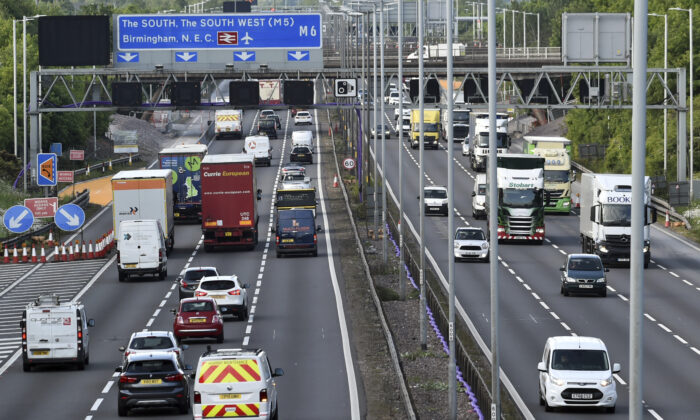 Traffic moves along the M6 motorway near Birmingham, England, on May 18, 2020. (Rui Vieira/AP Photo)
UK

“It’s just an insane way to have confusion for drivers,” he said.

Drivers don’t know how to use the smart motorway lanes that can be switched from use for broken down vehicles to normal vehicle lanes at peak traffic times or what to do if they break down on “one of these things,” Shapps said.

He highlighted the current lack of key “stopped vehicle” technology that notifies control room operators of stationary vehicles within about 20 seconds so that they can close lanes and deploy assistance quickly.

It was “entirely wrong to build a so-called smart motorway—and we question the naming of it—without the technology in place to make it safe,” he said.

He has now brought forward installation of the stopped vehicle kit “by several years,” he said, after applying pressure to Highways England, who are responsible for the smart motorway roll-out.

The technology will be installed by next year “on all of the network,” he said.

Shapps said he had inherited the smart motorways scheme when he took office last year and had quickly ordered a report on the project from Highways England.

The report triggered “18 different, separate things that must be done in order to make the motorway network safe,” he said.

Some things, like improved signage and the painting of all emergency areas bright orange, had already been carried out,” he said.

Shapps remarks follow much controversy around the safety of smart motorways and calls for their roll out to be reversed.

Pressure mounted last month when a Sheffield coroner said they present “an ongoing risk of future deaths” and called for an urgent review after an inquest into the deaths of two men.

The men were killed when a lorry collided with stationary vehicles on a stretch of the M1 in England’s South Yorkshire.

Following that Nicholas Leys head of roads policy at the RAC motoring organization complained in a statement that “precious little progress with retrofitting the stopped vehicle technology,” had been made.

Though RAC supports the technology, for it to work other drivers still need to see and obey the red ‘X’ closed lane signs, Leys said.

“If drivers don’t see these because gantries or verge-mounted signs are too far apart, then there’s still a risk of collision with a stationary vehicle,” he said.

Whilst acknowledging that some progress had been made since the Highways England report Leys called for additional safety measures like extra traffic officer patrols.

“These would be a crucial ingredient in providing extra protection for drivers that are unfortunate enough to be stranded in a dangerous live-lane scenario,” he said.

Asked by the transport committee whether amid safety concerns smart motorways would be scrapped, Shapps said they could not practicably be reversed.