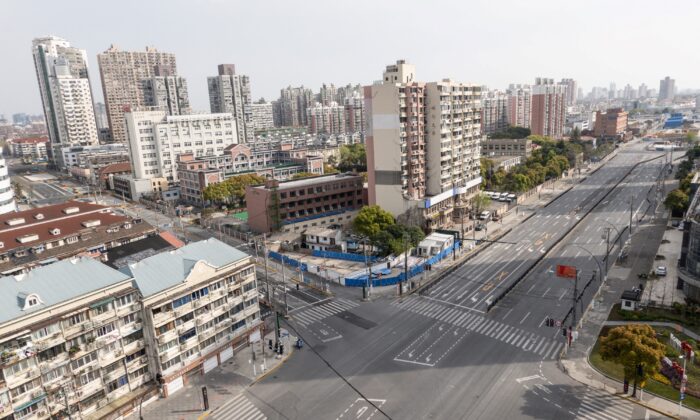 Empty streets are seen during the second stage of a COVID-19 lockdown in the Yangpu district in Shanghai on April 1, 2022. (STR/AFP via Getty Images)
CCP Virus

Shanghai’s continued insistence on a “dynamic clearance” strategy to snuff out COVID-19 has led to growing cries from residents voicing hardships ranging from the denial of medical care to being separated from their children sent to quarantine.

Stringent measures have been taken in an attempt to contain the Chinese Communist Party (CCP) virus outbreak in Shanghai. Persons and vehicles can only enter but not exit the lockdown zones. Convenience stores and supermarkets have stopped operating, while buses, subways, ferries, taxis, and online car-hailing are suspended.

The Epoch Times collected several posts from Chinese social platforms and interviewed residents from parts of Shanghai for a closer look at their hardships.

Ms. Zheng is a retired teacher in Shanghai’s Minhang District who suffers from uremia and has been unable to receive dialysis treatments due to the lockdown measures. She has been experiencing nausea, vomiting, high blood pressure, chest tightness, and dizziness.

On March 31, Zheng asked for help in an internet post. She had reached out to Shanghai’s CDC on March 28, attempting to arrange for a dialysis treatment but has yet to receive a response.

Ms. Wang, a Minhang District resident, told The Epoch Times that people couldn’t go to the hospital on their own amid the ongoing lockdown. They must call 110 and arrange for an ambulance to pick them up. Wang called it a “one-size-fits-all approach” and only some are lucky enough to get transportation.

On April 1, Ma Lei (pseudonym), a Shanghai Wenlai Middle School student, told The Epoch Times that his two aunts live with his 92-year-old grandmother. His grandmother has cancer, is paralyzed in bed, and has senile dementia. His older aunt, 66, has epilepsy and psychiatric problems. The two elderly women had a high fever for three consecutive days.

On April 2, a mother in Shanghai posted on Weibo that she had been forced to separate from her 5-year-old daughter.

“My child has had a high fever for a day and a night … I felt very helpless and sad when [the child] was forcibly transported to Jinshan Hospital alone,” the mother said. She tried contacting all relevant authorities to get permission to visit her daughter.

At the time of the post, it had been more than 48 hours since the child was taken to the hospital without her mother. During this period, she only received two calls from the hospital giving her a limited brief on her daughter’s condition and the doctor’s notes on the case.

On April 4, Xiao Zhang, a resident in Shanghai’s Changning District, told The Epoch Times that her father suffered from inverted papillomas, aggressive sinonasal tumors that arise in the nasal cavity and paranasal sinuses. The tumors grew to the point that they compressed his right eye, causing blurred vision and massive headaches.

As his condition became increasingly critical, she contacted local hospitals to arrange for surgery but all declined her request and told her to wait until the end of the lockdowns, which shows no sign of being lifted anytime soon.

However, what Xiao couldn’t understand was that she received admission orders and bills from the two local hospitals she contacted, but her father was never admitted to the hospitals.