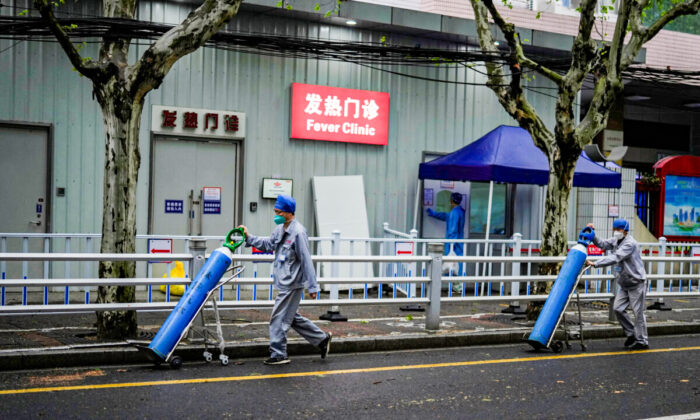 Authorities in Shanghai, which is grappling with its worst COVID-19 outbreak since the start of the pandemic, reported its first deaths on April 18.

“The direct cause of the death is their underlying disease,” Wu told reporters at Monday’s briefing. She added another 16 patients are currently in severe condition.

The official announcement of the deaths came amid growing speculation that fatalities from COVID-19 have been understated by regime authorities, which have a history of downplaying and covering up information about the outbreaks across the country.

The report marked the second time authorities logged deaths this year. The first reported deaths came in March, when two people over their 60s died after contracting COVID-19 in the northeastern province of Jilin. In 2021, China only registered two deaths.

The Chinese Communist Party (CCP) leveraged the news to claim that only its “zero-COVID” policy could maintain the death toll at such a low level, as stated in a commentary run by Chinese state-run news agency Xinhua.

Experts and residents, however, are skeptical of the reliability of the regime’s official death counts. China’s official death rate was understated by 17,000 percent, according to George Calhoun, director of the quantitative finance program at Stevens Institute of Technology, citing modeling by The Economist magazine.

Earlier this month, reports and social media posts said that patients died at a Shanghai elderly-care facility and other medical facilities that are battling unreported COVID-19 outbreaks. At least 20 people died in the Donghai Elderly Care Hospital, according to the Wall Street Journal.

Domestic media Caixin also reported dozens of deaths occurred at the same facility, but the report was quickly taken down.

Although details of each case are hard to verify, they underscore growing concerns that the outbreak is more severe than authorities have disclosed. Many residents have also told The Epoch Times that some case numbers had been underreported.

Shanghai reported some 22,000 new cases on April 17, pushing the total official infections in the current wave to over 300,000. Nationwide, China said 23,362 people tested positive over the past 24 hours.

However, the majority of cases reported were asymptomatic, raising questions about the need for strict measures from Beijing’s zero-COVID playbook.

More than 20 million residents in Shanghai have been barred from exiting their homes for three weeks as part of the efforts to contain the outbreak, leaving many struggling to obtain food and medical care.

Stories of deaths occurring as a result of the strict curb measures, rather than by the virus itself, have also been widely circulating online.

A prominent Chinese economist Larry Hsien Ping Lang said on April 11 that he lost his mother because the hospital demanded his 98-year-old mother, who was suffering from kidney failure, get a negative test result before being sent to the emergency room. His mother ended up dying during the wait for the test results.

Lang, who was sealed inside his home, didn’t get a chance to say goodbye as it took too long to obtain permission to exit his neighborhood community.

Last month, a Shanghai nurse died from asthma after being denied access to the hospital she worked in, as the emergency room was closed for disinfection in accordance with COVID-19 measures.

Despite the growing grievances and skepticism, there is little sign that the Chinese regime will relax its heavy-handed approach to the pandemic. Shanghai started a new round of mass testing on Monday.

Across the country, about 373 million people are under partial or total lockdown, analysts at Japanese bank Nomura estimated.