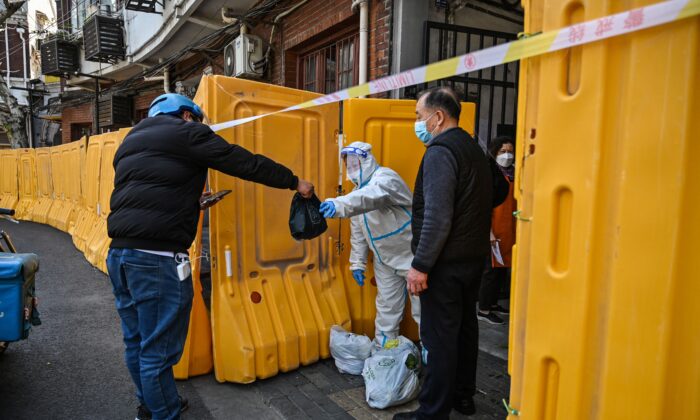 A worker, wearing a protective gear, guards the entrance to a neighborhood in lockdown as a measure against the Covid-19 coronavirus receive food from a delivery man, in Jing'an district, in Shanghai on March 29, 2022. (Hector Retamal/AFP via Getty Images)
China Business & Economy

Some of the harshest lockdown measures imposed anywhere in the course of the entire COVID-19 pandemic have led office workers in Shanghai to take the extraordinary step of sleeping in their offices in order to avert disruptions to their companies’ workflow. Some staff will be working in rotating shifts.

Personnel of brokers, exchanges, and asset managers in the financial district of Luziazui stocked their offices with sleeping bags and provisions for overnight stays in anticipation of one of two planned phases of a massive lockdown affecting the 26 million residents of Shanghai, Reuters reported on March 29.

On March 28, Shanghai authorities started implementing a city-wide lockdown in two phases, each stage applying to areas of the city on respective sides of the Huangpu River that divides the city.

A reported 20,000 people work at 285 office towers in Lujiazui finance district on the east side of the river.

The lockdown in the financial hub, which is also home to the world’s biggest port, has stirred fears of further disruptions to global supply chains. An economist recently projected that the lockdown would cost China’s economy $29 billion in two weeks.

Meanwhile, a 7 percent drop in oil prices on London’s exchange on Monday could be seen as a reflection of global anxiety resulting, in part, from the Shanghai lockdown, Michael Every of Rabobank told The Associated Press.

For all its enormous scope, the lockdown of Shanghai is wholly consistent with the Chinese authorities’ approach to COVID-19 outbreaks elsewhere in the country—a policy known as “zero-COVID”, according to Thomas Duesterberg, a senior fellow at the Hudson Institute.

It remains to be seen how effective the “sleep at the office” policy will be, but some disruption to normal work life is likely, at least for those who are unable to sleep at work and possibly also for office workers who experience a culture shock under the new arrangement.

Although lockdowns in China are not new, Duesterberg said he expects the Shanghai lockdown, along with those recently imposed in southern China’s Shenzen city and northeast China’s Jilin Province, have a marked economic impact that is sure to exacerbate a number of negative trends already underway.

“China’s economy is already slowing due to a variety of structural problems and the acute problems related to the real estate crisis and crackdowns on vibrant digital industries,” Duesterbeg noted.

He cited a range of problems the country was already facing notwithstanding the lockdowns, including an aging population, inadequate pensions and insufficient medical care for aging members of society, inequalities in the economic and educational status of urban versus rural parts of China, environmental degradation, severe dependence on foreign sources of energy, minerals, and grain, and rapid increases in debt.

The lockdowns, thus, will only compound such problems, he said, as commerce and industry in Shanghai and other cities and regions are disrupted by the restrictive measures.

However, it is a mistake to assume that things would improve in the absence of the current draconian measures imposed by the authoritarian regime. China’s problems are deep and structural, he noted.

“Lifting the lockdown would be helpful in the short term, but actions needed to address the many other problems would be much more difficult,” Duesterberg said.

For one thing, Chinese leader Xi Jinping would have to withdraw the regulatory stranglehold he has put on those sectors of the economy that might otherwise drive growth, such as real estate financing and the digital economy.

“Even these actions would only buy time to devise solutions to the longer-term problems, which would be even more difficult from a political point of view. Xi has few good options to stop a negative economic spiral,” Duesterberg said.