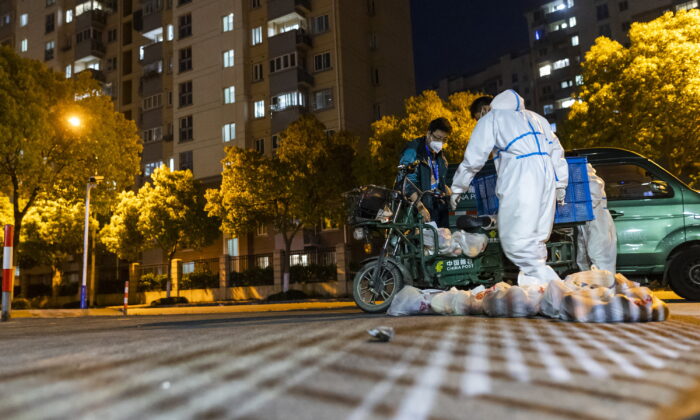 Deliverymen wearing protective suits with bags of food at the gate of a residential community in Shanghai, China, Monday, April 11, 2022. (AP Photo)
INSIDE CHINA

Shanghai residents are running short on provisions in the lockdown. Residents told the Chinese Epoch Times that they are facing a food crisis.

The citywide lockdown started on April 1, after a partial lockdown began in the east side of the city on March 28.

Shanghai residents seek ways to expose the current situation inside Shanghai through online videos. One video shows the exorbitant prices of produce, such as oranges at $2.96 each, strawberries at $7.68 a pint; and an order of 4 lettuce, 4 cucumbers, 4 loofahs, 3 potatoes, and 14 duck eggs at a cost of $25.14, which the netizen split with his daughter.

There is also a video exposing how the local neighborhood committee failed to distribute relief goods and left them sitting and rotting, meanwhile the residents were banned from doing online group buying.

Ms. Shen, a resident at the Jing’an District, had stocked up with food that she thought would sustain her through the lockdown.

She said that relief materials, such as meat and veggies delivered from outside Shanghai, were either stranded on the roads due to the strict lockdown policy or abandoned on site. “I have seen foods go directly into dump trucks once they were unloaded; but, those veggies looked fine to me,” she said, and “I don’t understand why they would not give it to us.”

On April 14, Shen told the Chinese Epoch Times that she’s learned that Shanghai actually sold the donated relief goods to the residents in lockdown.

Recently, an online video showed a quantity of materials arriving at a community being announced as “group buying goods;” a netizen questioned an on site staff why the packages were labeled “Relief Goods to Shanghai from Jianhu County,” and why the labels were being removed at the site. The staffer said she knew nothing about it.

Regarding this video and the many subsequent complaints online, Shanghai officials released a rumor clarification on April 10 saying that people misinterpret the labels “supporting goods” as “relief goods.” Attached to the clarification was a document from Jianhu County Agricultural Bureau dated on April 9 stating “among the goods of the two train cargos from Jianhu County, only 10 tons of cabbage belonged to donated produce from Jianhu government, the rest were delivered from a local producer for sale.”

Shen said that people are now aware of what the officials are doing, “It used to be petitioners suffering from the injustice; now the entire population has recognized their conduct, from Shanghai to the nation,” she said.

Ms. Chen, a resident of Puxi, Shanghai, told the Chinese Epoch Times on April 13 that the rations provided by the government were far from enough.

She said the rations were given per household, not on number of people in the family. “A household of three would receive the same amount as a household of one.”

Her son is away on a business trip and so she’s home alone, “otherwise, there would not have been enough for two people,” she said.

The food prices have markedly increased. Using eggs as an example, she said the price has gone up from about $1 per pound in February to more than $2 now.

She said, that elderly people who live on subsistence allowances and know nothing about WeChat or cell phones, aren’t able to buy anything.

According to Chen, groceries are only available online; the supermarket across the street offered an online purchasing platform. Every morning, ordering through online group buying is extremely difficult, the variety and quantity are so limited that it’s gone the moment it’s posted. “If you don’t live in the neighborhood, they won’t even deliver it,” she said.

A local supermarket in Chongming District was investigated for selling a pack of veggies for $43.93. It contained 10 varieties of veggies at a total weight of 11 pounds, Beijing News reported on April 14. Chinese netizens indicated that’s actually about market price in Shanghai now. More netizens were concerned that even the high-priced veggies weren’t available, and commented, “The authorities should also safeguard the availability of supplies.”

According to the regime’s mouthpiece CNR (China National Radio) report, Shanghai’s Civil Affairs Bureau introduced a one-time subsidy for local elderly on April 15. However, it’s only available to those in extreme difficulty in lockdown and have valid Shanghai household registration.

With regard to the latest one-time subsidy, netizens criticized, “Is the subsidy a solution to the soaring price of produce?” “Are we supposed to do grocery shopping one time only?” “It’s discrmination against those who have no Shanghai household registration.”

A netizen wrote: “I have not starved to death only because I engaged in the online panic buying every day.”