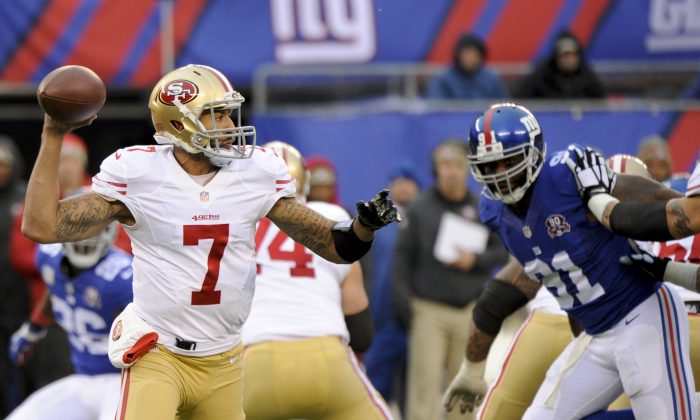 The San Francisco 49ers won a close game against the New York Giants. Here’s some of the latest buzz:

Linebacker Ahmad Brooks said that he was angry that coaches took reps away from him and gave them to Aldon Smith, who came back from a suspension, and Aaron Lynch.

49ers coach Jim Harbaugh said, “We need Ahmad Brooks to win a championship. I feel that wholeheartedly and have felt that way.”

He said he and Brooks are currently “working through” their problems.

According to reports earlier this season, the 49ers were in talks to trade him before the deadline. Harbaugh said his roster spot isn’t in jeopardy.

Linebacker NaVorro Bowman was cleared to return to practice this week.

The 26-year-old was sidelined with a knee injury (ACL and MCL ) that he sustained during last season’s NFC championship game loss to the Seahawks.

In Bowman’s absence, rookie Chris Borland has been making waves, however. He posted 11 tackles and had a fumble recovery against the Saints last week.

NBC reported that Bowman will start practicing during the week.

Other reports, including one from ESPN’s Adam Schefter, said there is a possibility that Bowman won’t play at all this season due to the injury.

Kaepernick throws the ball to hard?

Some have criticized Colin Kaepernick for throwing too hard.

“He doesn’t,” wide receiver Quinton Patton said, according to the SF Chronicle. “He just gets it there.”

“He throws the ball with the necessary speed,” wide receiver Stevie Johnson added.

In the past, Kaepernick has spoken about throwing a bit softer than before.

The 49ers, along with several other teams, are eyeing CFL star Duron Carter, according to a CBS report.

Carter, a wide receiver who is the son of former Vikings great Cris Carter, can start negotiating with teams next month.

“Several sources close to the player believe the Colts will quickly emerge as the favorites to land him, and Indianapolis has significant interest in the potential impact player,” the report says.

But the report stipulates that “there are no shortage of teams very interested in him (sources said the Seahawks and 49ers are likely to be among his other suitors).”

The DEA made a surprise visit to the 49ers to determine if team doctors and trainers are complying with federal law.

The Drug Enforcement Agency is said to have grilled members of the team’s medical staff following the 16-10 victory against the Giants.

“The only thing they asked was whether he was carrying any controlled substances,” 49ers spokesman Bob Lange told the Daily News. “He’s our team physician. He said, ‘No.’ That was it.”

Payne described the DEA’s moves on Sunday as “administrative in nature, not criminal.”

No arrests were made, but the News said that violations by team personnel were documented.

“We will not speculate on future action with regard to DEA registrants under investigation,” Payne added.