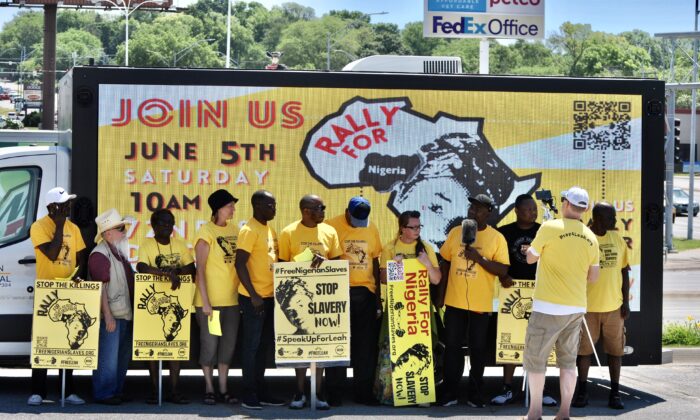 A rally held in Omaha, Nebraska, on June 5, 2021. (Courtesy of Committee to Free Nigerian Slaves)
Africa

American activists decrying the Christian genocide in Nigeria are asserting that jihadist violence is motivated partly by an effort to enslave women and girls.

“Most of the individuals captured by Boko Haram jihadists are young women and girls taken by force and trafficked as slave concubines,” the Committee to Free Nigerian Slaves (CFNS) said a statement.

CFNS members demonstrated against the practice around a billboard in downtown Omaha, Nebraska, on June 5.

“They endure horrendous abuse and mistreatment. An example of one of these victims is displayed on the billboard: She is 18-year-old Leah Sharibu, kidnapped from her school in Dapchi, Nigeria, in 2018,” event organizer Stephen Enada told The Epoch Times.

Because Sharibu refused to renounce her Christian faith, she has been condemned to lifelong enslavement and is reportedly still in captivity in Northeastern Nigeria, according to the Leah Foundation in Dapchi. The CFNS made the same claim at a demonstration in downtown Minneapolis, Minnesota, in May.

Gov. Sani Bello of Niger State referenced slave taking and sex slavery on April 26, when he told Channels TV the insurgency known as Boko Haram had captured the town of Shiroro.

“Wives have been seized and forcefully attached to Boko Haram members. They are claiming it as their territory and will use it just as they have used Sambisa Forest,” the governor said, referring to the thornbush-choked desert used by the insurgency since 2009.

Nigeria, a key U.S. ally, is ranked third in the 2020 Global Terrorism Index of countries most impacted by terrorism.  Nigeria’s complex geopolitical conflict has claimed more than 60,000 lives since the emergence of Boko Haram, which translates to “Western learning is forbidden.”

Subject specialists focusing on West Africa have warned if Nigeria—containing the largest population in Africa—slides into an Islamist state or an ungovernable territory, most of West Africa could be soon to follow.

“Bring back our girls” was the slogan championed by First Lady Michelle Obama after Boko Haram kidnapped 276 girls at a government school in Chibok in Borno State on April 14, 2014.

“The original purpose of the Chibok raid was not to get a ransom, but to marry the students to Boko Haram fighters,” David Otto, a London-based defense consultant, told The Epoch Times.

In the ensuing weeks, girls were released in groups. But to date, 112 of the Chibok girls are missing and may have died in captivity or been forced to marry terrorists. Over the following seven years, Boko Haram and other terrorist groups have kidnapped hundreds of women and girls for ransom, but some have been kept as slaves, according to media accounts.

“A lot of women and girls captured and enslaved by Boko Haram and held in hidden enclaves in the Lake Chad region have been recaptured, along with weapons, equipment, and food stores, by the Islamic State of West Africa (ISWAP),” according to Otto.

The longtime leader of Boko Haram, Abubakar Shekau, committed suicide on May 18 at a hideout in the Sambissa Forest, as reported on May 21 by The Wall Street Journal and The Epoch Times. Infighting between the Boko Haram loyalists and the larger and ascendant ISWAP has been intense during the ensuing four weeks, Otto said.

“The infighting is said to have resulted in the death of several jihadists from both camps with the Bakura group [Boko Haram loyalists] reported to have successfully kidnapped and carted away some of the wives, arms, and foodstuffs of ISWAP fighters; including vulnerable women ISWAP leadership had enslaved and retained as sex slaves from the Shekau-led camp in the same location,” Otto reported on his website.

“In retaliation, sources say the ISWAP-led faction planned and launched a reprisal attack against the stubborn Bakura unit, recovering some of their wives, ammunition, and some remaining foodstuffs previously carted away by the Bakura faction. Both sides lost several fighters in that encounter.”

The nexus between Shekau’s penchant for sex slavery and a tradition of slave raiding in the Lake Chad region more than 100 years ago was reported by three scholars in 2018 on the website Africa Is a Country.

“The colonial presence in northern Cameroon and north-eastern Nigeria was marked by the persistence of systems of enslavement, which lasted until at least the 1940s and in diluted forms until even more recently,” according to an article titled “The Slave Holders on the Border.”

The notorious slave raider Hamman Yaji, an ethnic Fulani man, left such a sordid legacy of capturing and trading women that the people in the Mandara Mountains on the border between Nigeria and Cameroon still call Boko Haram “Hamaji” and link the monstrous Hamman Yaji with Shekau.

Yaji celebrated his captures and murders in an autobiographical journal dictated between 1912 and 1927 that recounts approximately 100 raids by his militia in the Mandara Mountains, where he enslaved at least 1,600 women and girls and murdered more than 150 people.

The authors cited Yaji’s diary entries to underscore his obsession with trafficking women and killing any opponent who stood in the way of what he considered a divinely appointed mission.

“June 11:  … I sent Barde to Wula, and they captured six girl slaves and ten cattle, and killed three men.”

“June 25: … I sent my people to the pagans of Midiri and Bula, and they captured 48 slave girls and 26 cattle, and we killed five people.”

“Analogies between Yaji and Shekau remain striking, especially for the inhabitants of the Mandara Mountains: extreme violence, the evocation of the slave market, the idea of being invested with a divine mission, the production of quasi-apocalyptic discourses, the division of the world into ‘believers’ and ‘unbelievers,’ and the inspiration drawn from Islam are as easily recognizable in the earlier historical moment as they are today,” the authors argued.

The Committee to Free Nigerian Slaves plans to continue a campaign to publicize the linkage between slavery and what they perceive to be a war on Nigeria’s 100 million Christians, according to Kyle Abts, a member of the committee’s organizing coalition.

“In addition to female captives becoming slave concubines, there are hundreds if not thousands of young boys being conscripted and brainwashed into Boko Haram/ISWAP forces. Why does the world ignore such egregious violations of children’s rights?” Abts said.

Douglas Burton may be reached at BurtonNewsAndViews@gmail.com.