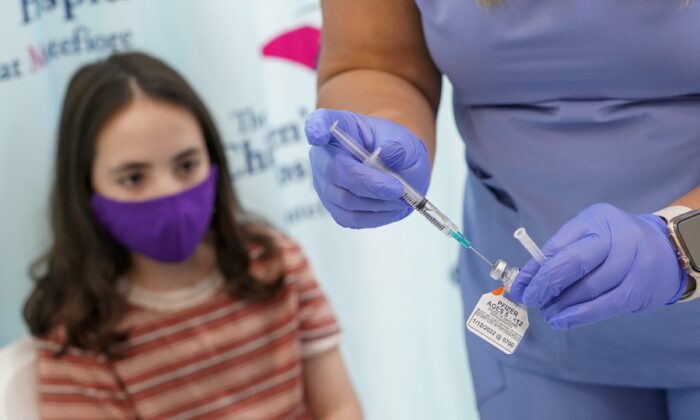 A top infectious disease doctor has raised alarm about COVID-19 vaccine mandates despite top federal officials recommending them for businesses, schools, and other institutions.

Dr. Matthew Memoli, who runs a clinical studies unit within the National Institutes of Health’s National Institute of Allergy and Infectious Diseases—headed by Dr. Anthony Fauci—is scheduled to argue against COVID-19 vaccine mandates during a Dec. 1 seminar hosted by the agency, according to David Wendler, a senior NIH bioethicist who is planning the seminar.

“There’s a lot of debate within the NIH about whether [a vaccine mandate] is appropriate,” he told The Wall Street Journal. “It’s an important, hot topic.”

Memoli had told Fauci in a July 30 email that he believes “the way we are using the vaccines is wrong,” adding that mandated vaccines are “extraordinarily problematic,” according to the WSJ.

In comments to the paper, Memoli said that he supports COVID-19 vaccination in high-risk groups including obese people and the elderly. However, widespread vaccinations for people who have a low risk of death or severe illness from COVID-19 could hamper the U.S. population’s ability to develop more robust protection against the virus via previous infections, he said.

A Centers for Disease Control and Prevention (CDC) study released last month suggested that those who had a previous COVID-19 infection saw a five times higher chance of testing positive than those who were fully vaccinated and never had COVID-19.

Dr. Jeffrey Klausner, who previously conducted a study that suggested people with natural immunity are at low risk of reinfection, told The Epoch Times that the CDC’s research was observational and said that “randomized controlled clinical trials are the gold standard of medical evidence.”

Memoli also told the paper that he has sought an exemption from the federal vaccine mandate on religious grounds, saying he is willing to risk his job and medical license for the right not to receive a COVID-19 vaccine.

Regarding the discussion, Memoli said that “part of my career is to share my expert opinions, right or wrong … I mean, if they all end up saying I’m wrong, that’s fine. I want to have the discussion.”

The NIH seminar comes as a federal appeals court temporarily blocked President Joe Biden’s COVID-19 vaccine mandate targeting private businesses with 100 or more employees. About two-dozen states have filed lawsuits against the rule, arguing the federal government lacks the authority to implement it.

The NIH has not responded to a request for comment on the seminar. When contacted by The Epoch Times, an NIH official said Memoli would decline to comment.

The Epoch Times has also submitted a Freedom of Information Act request to obtain Memoli’s email.

Correction: A previous version of this article mischaracterized the conclusion of the CDC’s study, which was that people who had a previous COVID-19 infection saw a five times higher chance of testing positive for the disease. The Epoch Times regrets the error.