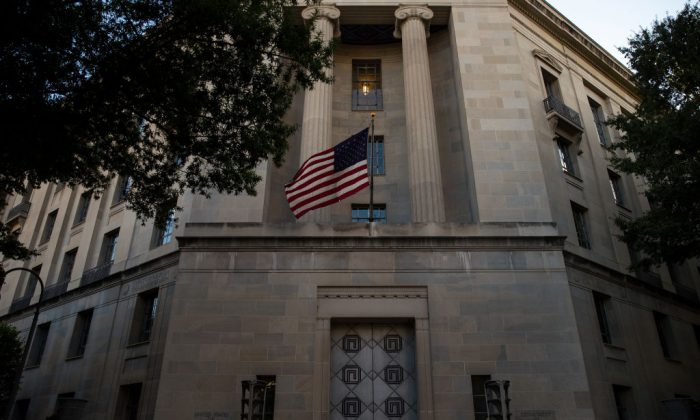 An exterior view of the U.S. Department of Justice headquarters in Washington on July 25, 2017. (Drew Angerer/Getty Images)
Politics

A top Justice Department (DOJ) official who signed off on the appointment of special counsel Robert Mueller and oversaw the Russia probe announced his resignation on July 3.

Associate Deputy Attorney General Scott Schools said he will step down on July 6. Schools is taking a private-sector job after two decades with the DOJ.

Attorney General Jeff Sessions appointed Bradley Weinsheimer to replace Schools. Unlike Schools, Weinsheimer will not be involved in the Mueller probe, according to the DOJ.

“Scott Schools has been a fabulous lawyer for the Department of Justice for close to 20 years, rising through the ranks at the Department to become our most senior career attorney,” Sessions said in a statement. “Scott has provided invaluable leadership and counsel in his years at the Department, and his service is an example to all. He will be greatly missed, and I wish him the best in his future endeavors.”

Schools was one of a select group of DOJ officials who received regular updates on the Mueller probe. Schools and Principal Associate Deputy Attorney General Ed O’Callaghan have been meeting with Mueller every week, according to NPR.

Mueller was appointed in May last year to investigate alleged collusion between the Trump campaign and Russia. The investigation has not yielded any indictments related to collusion but has ensnared several associates of President Donald Trump in unrelated indictments. Trump calls the special counsel investigation a “witch hunt.”

Schools also participated in several of the most sensitive DOJ decisions, including the firing of FBI Deputy Director Andrew McCabe for lying to investigators about authorizing a self-serving leak to the media. According to a report by the DOJ inspector general, Schools was one of at least three officials who provided comments and edits for the Nov. 6, 2016, letter to Congress by then-FBI Director James Comey that exonerated Hillary Clinton two days before the presidential election.

In 2017, Schools likely spoke to the attorneys for disgraced FBI officials Lisa Page and Peter Strzok. An email chain shows that he had obtained the contacts for Page’s and Strzok’s lawyers. Text messages between Page and Strzok were at the center of a damning DOJ watchdog report on the handling of the Clinton email probe. The pair exchanged thousands of messages, some of which betrayed a strong bias against Trump and support for Clinton during the 2016 election.

Strzok played a key role in both the investigation of Clinton’s use of a private email server and the counterintelligence probe into alleged ties between Trump associates and Russia, both of which occurred during the election.

The Page–Strzok messages “cast a cloud” over the email investigation, the inspector general’s report concluded. The messages indicated that Strzok was willing to take official action to interfere with Trump’s campaign. At one point, Strzok told Page that he will “stop” Trump from becoming president.

Schools is the latest departure at the Department of Justice and the FBI, both of which have lost face over the handling of the Clinton email investigation and potential abuses of government surveillance against the Trump campaign.

Page resigned earlier this year. Strzok was escorted out of FBI headquarters and lost his security clearance last month. The House judiciary committee slapped him with a subpoena to appear for a public hearing on July 10.

Schools was hired by Yates, who briefly entered the national media spotlight last year when she declined to carry out an order by Trump. The president then fired her.

Schools’s replacement, Weinsheimer, has served in the Justice Department for 27 years. He was appointed as assistant U.S. attorney in Washington in 1991. After 20 years in that post, he moved on to serve as the deputy counsel in the Office of Professional Responsibility until 2016. He then served as the chief of staff and director of risk management, and senior counsel at the DOJ’s National Security Division.

Chappell gained a huge YouTube following with a channel dedicated to exposing the truth about China. His foray into American politics is already proving to be a success. His channel, “America Uncovered,” can be found here.