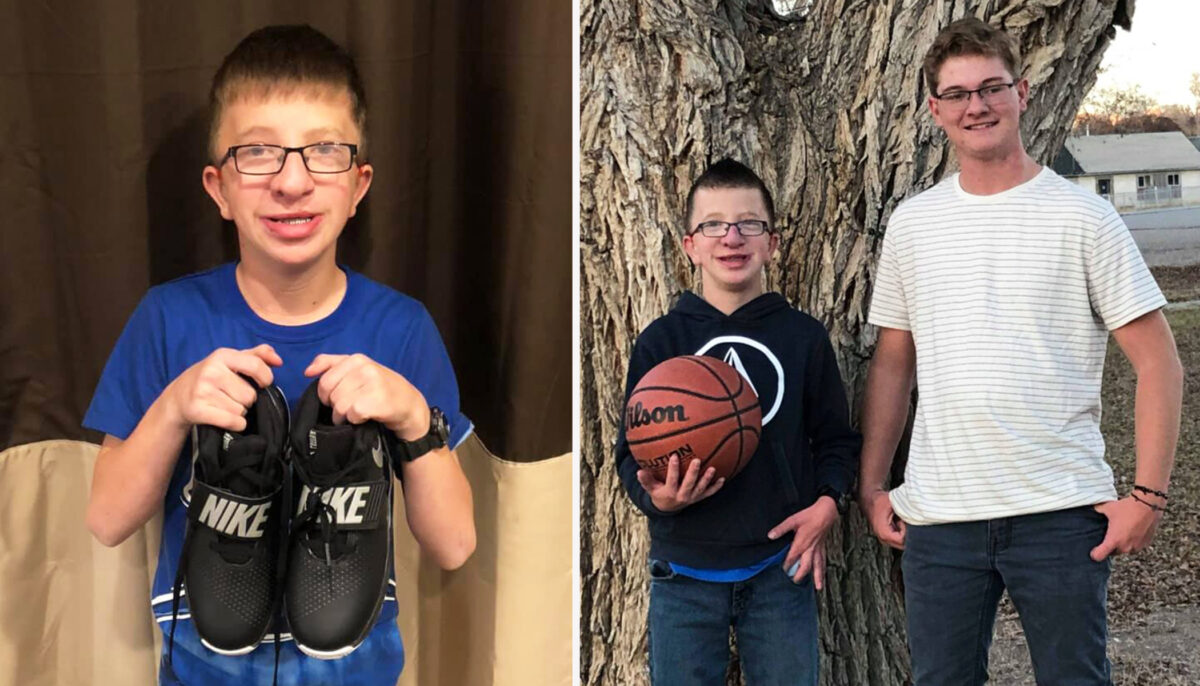 When a senior from Lund High School in Ely, Nevada, heard that someone had taken his 8th-grade buddy’s shoes and put them in the toilet, he responded with a heartfelt gesture by buying him a new pair of basketball shoes.

Tanner’s mother, Meghan Hendrix, told The Epoch Times via social media that she felt “heartbroken and helpless” upon learning that her son’s shoes had been dumped in the toilet. “I was also very sad because we live in a very small community and we know all the kids in the school, which meant we knew whoever had done this,” she added.

Luckily for the 14-year-old, who studies in 8th grade and plays on the junior high’s basketball team, he had a champion in the form of his buddy Skyler, who plays the same sport for the high school team.

Skyler had come across his friend sitting alone in the school canteen and joined him to eat lunch. “We were talking about his shoes and he said, ‘It’s okay, they might be joking,’” Skyler regaled via his mother, Amy Janet Carter, to The Epoch Times. “This is the kind of person Tanner is.

“I felt bad for Tanner because he did not deserve that,” Skyler reflected. “He is always smiling and happy, no matter what.”

However, the school bell rang before the senior could ask Tanner for his shoe size. Determined, Skyler asked a teacher’s aide instead. He texted his mom to share the upsetting incident and sought her approval for buying a new pair of shoes.

“I was wondering if I could buy him new shoes?” Skyler texted. “Yes of course!” his mom responded. “Why don’t you find him and put your arm around him. Having you support him will mean a lot.”

Skyler put his plan into action. A week later, he showed up on Tanner’s doorstep with a brand-new pair of Nikes in hand. Meghan, touched by the senior’s gesture, shared doorbell cam footage on Facebook.

“This act of kindness has me in complete awe,” she wrote.

Skyler admitted he had no idea how much his gesture would mean to Tanner’s family. The shoes are a little big for Tanner, he said, but the 8th-grader doesn’t want them exchanged; he insists they are his “basketball shoes for high school.”

“I saw Tanner at school and he called out, ‘Thanks for the shoes, bro!’” Skyler told The Epoch Times. “This made me feel happy. I could hear him telling other kids about the shoes.”

On being on the receiving end of the heartfelt gesture, Tanner, according to Meghan, was “a little starstruck” that a high school player would buy him basketball shoes.

“I had been very emotional trying to come to terms with what had happened, and Skyler’s act of kindness softened my heart,” she added. “It was a very positive spin to what started out as a very negative experience.”

Life has not been easy for Tanner—he has endured multiple surgeries since birth, and sometimes needs extra help with things that come easily to most people—but he “has more heart than any person I’ve ever met,” said Meghan.

“Today if you were to ask Tanner if he has ever been bullied, he would tell you he never has,” Meghan reflected. “He’s always the first to offer help and to cheer everyone on, he will be the loudest one clapping when someone on the opposing team makes a basket. … Everyone needs a Tanner!”

Skyler’s take-home message for others is pure and simple: “When you think of something nice to do for somebody,” he said, “you should just do it.”