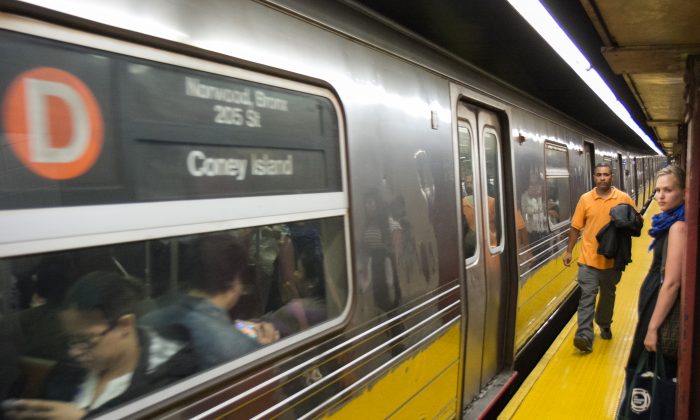 People wait to board the D Train at the 34th Street platform in New York City on May 23, 2012. (Benjamin Chasteen/Epoch Times)
New York

The bill includes a $3 billion investment in new technology that will improve safety on rails, such as “positive train control,” which allows trains to automatically brake when they are about to collide.

At a press conference held at the Grand Central Terminal on Sunday, Schumer and Blumenthal recalled a series of incidents involving Metro-North trains in the past year, including a train that derailed in the Bronx last December, killing four and injuring more than 60.

A later investigation by the National Transportation Safety Board revealed that the train operator had undiagnosed sleep apnea.

In May 2013, a Metro-North train derailed near Fairfield, Conn., after which another train going in the opposite direction collided with it. The incident resulted in at least 72 people injured.

To deter drivers from falling asleep or getting distracted, the bill will require cameras to be installed inside train operator cars. Cameras will also be installed outside the car allowing train conductors to detect problems with the rails and train signals.

This past Saturday morning, a Metro-North work train derailed in the Bronx, but there were no reported injuries or deaths, according to the New York Post.

“With all of these derailments and other mishaps, it’s obvious we need a dramatic overhaul when it comes to rail safety, both passenger and freight,” Schumer said at the press conference.

There have been 95 injuries and four deaths this past year involving Metro-North, Long Island Railroad, and New York City subway trains, according to Schumer.

Following the Bronx derailment, the government agency charged with enforcing rail safety regulations, the Federal Railroad Administration, reviewed the Metro-North Railroad and found that the railway prioritized getting its trains on schedule rather than safety, according to the report released in March.

Blumenthal said both safety and train reliability could be achieved. “There should be no contradiction or conflict between on-time performance and safety,” he said.

Schumer and Blumenthal especially expressed concern for oil tankers that run through upstate and Connecticut, citing derailments that have happened in other parts of the country. The bill will also have more stringent regulations for trains transporting oil.

Blumenthal blasted the Federal Railroad Administration for failing to implement safety recommendations that the National Transportation Safety Board issued in 2008. The proposed legislation will require both agencies to better enforce their regulations.

“Watchdog agencies have to have more bite, not just bark,” Blumenthal said at the press conference.

To effectively punish railways when they fail to keep up with safety standards, the bill will also increase the amount in civil penalties for safety violations, from the current $25,000 to $100,000. For serious violations, fines can go up to $1 million.