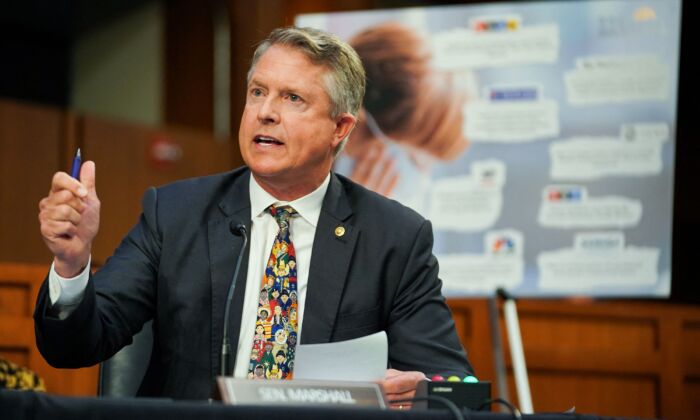 The White House and the Centers for Disease Control and Prevention (CDC) should acknowledge the immunity gained from prior COVID-19 infection in their messaging, Sen. Roger Marshall (R-Kan.) said on Dec. 12.

Marshall, a doctor, has called for many Americans to get a COVID-19 vaccine, but also opposes vaccine mandates, such as the ones put forth by President Joe Biden and top officials in his administration. Instead of mandating vaccination, Marshall recommended being honest with people about the vaccines, including how studies indicate people with natural immunity, or the immunity that people have after recovering from COVID-19, gain little benefit from getting a vaccine.

Host Chuck Todd challenged the senator, questioning whether he was encouraging people to get the virus that causes COVID-19.

“Would you advise somebody to get the virus rather than get the vaccine?” Todd asked.

“Of course not,” Marshall said. “But if you’ve had the virus, that needs to be acknowledged and then a decision made with the patient and the doctor deciding if they should get the booster or not.

“Maybe check their level of antibodies. Take into account what their health care situation is. A type II diabetic that’s had the virus, I would check their level of antibodies and probably encourage them to get the booster. But a 19-year-old Navy SEAL who has a higher chance of getting pericarditis, a heart inflammation, than going to the hospital from the virus, I probably would have a different answer. So, you cannot have a one-size-fits-all recommendation from the federal government.”

A slew of studies—including a recent one from Israel—indicate that people with natural immunity have better protection over time against the CCP (Chinese Communist Party) virus than those who got a vaccine, but have never been infected.

Some research also suggests that people with natural immunity get a higher level of protection when they get a single vaccine dose, though some experts have argued that the boost is negligible and have noted that it may come with an added risk of side effects.

The CDC has acknowledged natural immunity in recent months, after spending little time discussing it throughout the pandemic. The agency said in November that immunity from vaccination and from prior infection both last at least six months, but alleged that no tests are available to reliably determine whether a person has natural immunity to the virus. Dr. Rochelle Walensky, director of the CDC, has encouraged virtually everybody, including the naturally immune, to get vaccinated.

The Biden administration hasn’t appeared to touch on natural immunity, and none of the federal vaccine mandates—many of which are being held up by the courts—include opt-outs for people who are naturally immune to COVID-19.

Marshall said senior citizens, one of the groups most at-risk of dying from the disease, should get a vaccine booster and that people with prior infection should consider getting one.

“If you’re a senior citizen and haven’t gotten your booster yet, shame on you,” he said. “Please go do that. If you have underlying health care conditions, if you’re diabetic, if you’re overweight, please go get the booster, because you’re going to get the virus and be exposed to it, I’ll guarantee it.

“And if you don’t have that booster, we know the vaccines kind of run out after about five to six months. Natural immunity would help, and even those with natural immunity may want to consider getting the booster as well.”