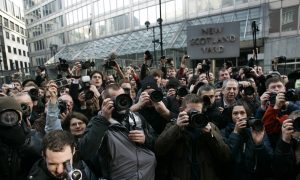 WASHINGTON—On Tuesday, Sen. Ron Wyden, an Oregon Democrat and skeptic of broad government surveillance, objected to a bill that would have required social media and online sites like Google, Yahoo, Twitter, and Facebook to alert federal authorities of any terrorist activity.

The proposal, by Sen. Dianne Feinstein (D-Calif.), had been tucked into a broader bill authorizing intelligence programs throughout the 2016 budget year and became the subject of several private meetings on Capitol Hill between congressional staff and industry officials.

In a statement submitted into the Congressional Record, Wyden said the Senate had been asked on Tuesday to approve the intelligence authorization bill by unanimous consent. Doing so would bypass any debate. A spokesman for Senate Majority Leader Mitch McConnell (R-Ky.) confirmed that leadership had hoped to pass the bill before the August recess, but that not all senators were on board.

Wyden said he would insist on a debate because of “very valid concerns” made by the technology industry.

“Internet companies should not be subject to broad requirements to police the speech of their users,” Wyden said in the statement.

“Internet companies should not be subject to broad requirements to police the speech of their users.”
— Sen. Ron Wyden

Feinstein argued that the requirement was nearly identical to one related to child pornography. But tech companies said the bill was so vague it would be almost impossible to determine whether they were meeting their legal obligations, or if they were on the hook if they miss a tweet, video, or blog that hints of an attack. They said the result would probably be a deluge of tips to law enforcement, making it tougher for the government to find more valuable information.

“The FBI and the intelligence community have made it abundantly clear that the terrorist threat is severe and increasing, and that those directing, inspiring, and carrying out attacks make heavy use of social media sites,” Feinstein told The Associated Press in an emailed statement provided last week. “This provision will help get potentially actionable information to the agencies responsible for preventing attacks, without requiring companies to take any steps to monitor their sites they aren’t already taking.”

“But I haven’t yet heard any law enforcement or intelligence agencies suggest that this provision will actually help catch terrorists, and I take the concerns that have been raised about its breadth and vagueness seriously,” Wyden wrote.

Since the 2013 disclosure of government surveillance by former contractor Edward Snowden, the tech industry has led an aggressive public push to limit surveillance requests and increase transparency, adopting more sophisticated encryption techniques despite opposition from the Justice Department. Their primary argument has been that consumers won’t use technology they don’t trust, and that unnecessary surveillance would hurt the industry.

The Islamic State in Iraq and Syria group and similar organizations have relied heavily on Twitter and Facebook to recruit followers, while militants post beheading videos on sites like Google Inc.’s YouTube, giving them the chance to go viral before being shut down. In 2013, al-Shabaab live tweeted its Westgate shopping mall massacre, opening up new feeds even after Twitter Inc. shut others down.