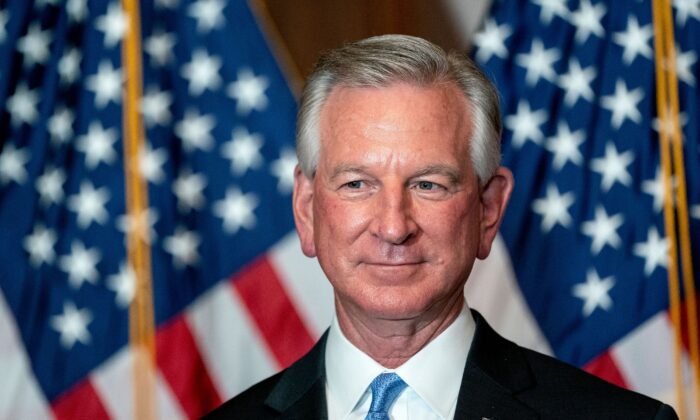 Senator-elect Tommy Tuberville (R-Ala.) stands for a photo at the US Capitol in Washington on Nov. 9, 2020. (Stefani Reynolds/Pool/AFP via Getty Images)
2020 Election

A Republican who will be in the Senate when Congress meets to count electoral votes next month suggested that he’ll join in the planned objection by members of the House of Representatives.

“You see what’s coming. You’ve been reading about it in the House. We’re going to have to do it in the Senate,” Sen.-elect Tommy Tuberville (R-Ala.) said after speaking at a rally in Georgia.

The video was captured by Democrat activist Lauren Windsor.

Tuberville’s campaign hasn’t responded to requests for comment on whether he plans to join in objecting to electoral votes on Jan. 6, 2021, in a bid to hand President Donald Trump the election.

Stan McDonald, Tuberville’s campaign chairman, said on WVNN radio on Tuesday that Tuberville and Sen. Ted Cruz (R-Texas) were “the two best candidates” to challenge the results from the Senate.

“I don’t know yet if or when he will do this. I do know that he’s very seriously considering it,” McDonald said.

Tuberville unseated Sen. Doug Jones (D-Ala.) after trumping former Sen. Jeff Sessions (R-Ala.), one of Trump’s earliest supporters, in the Republican primary. Tuberville portrayed himself as someone who would be a strong Trump ally if he was elected.

Objections during the joint session require at least one House member and senator. If a member from each chamber challenges a state’s votes, each chamber withdraws and debates the objection. Upholding it requires a majority vote, something considered unlikely because of the number of Republican senators who have said they won’t back the effort.

“The fact of the matter is, that’s been litigated over and over, the Department of Justice has weighed in,” Sen. John Thune (R-S.D.), the number two Republican senator, told reporters this week.

“The states have all certified, the electoral college has acted, it’s time to be done with this, and I would hope that we wouldn’t have members of the Senate, who would decide that that makes sense. I don’t think it’s a good decision right now. And I don’t think it’s good for the country.”

Senate Majority Leader Mitch McConnell (R-Ky.) on the Senate floor on Tuesday called Biden “president-elect,” sparking backlash from within the party and prompting threats to primary any GOP senators that don’t fight alongside Trump.

“Congress has the absolute right to reject the submitted Electoral College votes of any state which we believe has such a shoddy election system that you can’t trust the election results that those states are submitting to us, that they’re suspect,” Brooks told The Epoch Times last month. “And I’m not going to put my name in support of any state that employs an election system that I don’t have confidence in.”