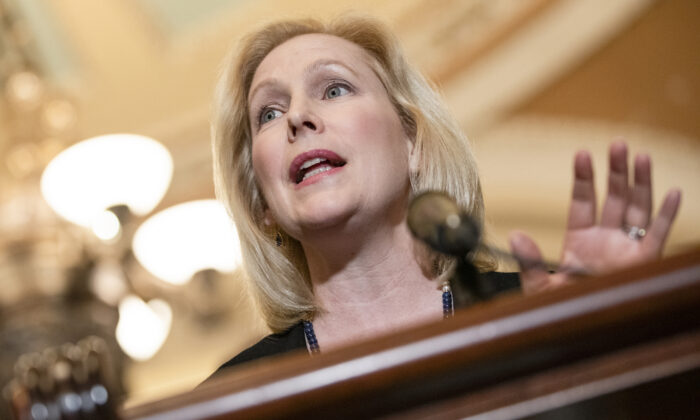 A New York senator said that President Joe Biden should consider using the Defense Production Act to boost baby formula supply amid a nationwide shortage as Republicans accused the White House of prioritizing sending formula to holding facilities for illegal immigrants at the border.

Sen. Kirsten Gillibrand (D-N.Y.) told NPR that she will ask the president to consider using the provision to get more companies to manufacture baby formula, describing it as a “life or death issue.”

Some mothers are “having to choose between taking their children to the nearest emergency room just in desperation for formula, or putting their kids on feeding tubes,” she explained.

Earlier this year, Abbott Laboratories issued a recall of certain products that were made at its facility in Sturgis, Michigan, amid a Food and Drug Administration investigation into whether its formula was contaminated with a form of bacteria that led to several sick infants. The company—which makes Similac, EleCare, and Alimentum—said in a Wednesday update that it would attempt to get the Sturgis plant back online but stressed it would take weeks for products to return to shelves.

“They had safety violations,” Gillibrand claimed, although Abbott said that the Cronobacter sakazakii bacteria was found in environmental testing sites that were not linked to known illnesses. Four babies were allegedly sickened due to the contamination, including two deaths, according to officials.

“They had a whistleblower who told the FDA about these violations in October of 2021. They didn’t take it seriously. They didn’t do an immediate investigation,” Gillibrand claimed. “And it wasn’t until February of 2022 that the FDA got their act together and started an investigation. So this has created exacerbated situations because now this whole supply chain has been shut down from Abbott.”

Repeating claims from other Democrat elected officials claims, Gillibrand said baby formula manufacturers “are unwilling to produce enough formula because they think it costs too much money.” She did not elaborate on why she believes manufacturers are not producing enough.

“They need to be told they have to double their production immediately. For a lot of these babies this is a life-or-death issue,” she said. “I would urge investigation of the four major companies that produce formula in this country to see whether they’re price gouging, whether there is corporate greed and malfeasance at play, and whether they are willing to increase their production immediately under the Defense Production Act or under just the request of America to protect babies,” Gillibrand continued.