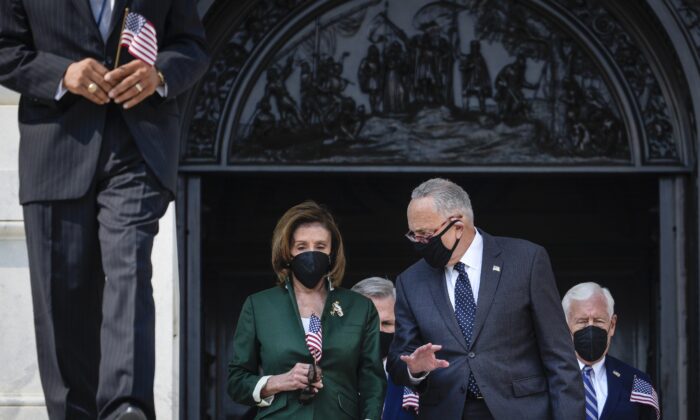 (L-R) Speaker of the House Nancy Pelosi (D-CA) and Senate Majority Leader Chuck Schumer (D-NY) talk with each other as they walk down the steps of the U.S. Capitol in Washington, DC., on Sept. 13, 2021. (Drew Angerer/Getty Images)
Democrats

The Senate voted on Tuesday to raise the debt limit by $2.5 trillion until 2023 after months of political wrangling between Democrats and Republicans.

Passed by a party-line vote of 50–49, the debt ceiling increase bill is expected to quickly come to President Joe Biden’s desk for his signature.

Upset with Democrats’ “out-of-control spending spree,” all 50 Republicans refused to help Democrats raise the debt ceiling, a position that they have held to firmly for months.

After Republicans filibustered one effort to raise the debt ceiling through normal legislative means, leaders from both parties reached a deal to temporarily extend the debt ceiling until an agreement could be reached.

The vote came as the Treasury Department was on the verge of default, a circumstance that Treasury Secretary Janet Yellen warned would be economically “catastrophic.”

For months, the Treasury Department has been using what Yellen described as “extraordinary measures” to keep making interest payments on U.S. debt. Yellen and others encouraged the Senate to quickly reach an agreement and raise the debt ceiling, but political division between the two major parties has been a roadblock to that goal for months.

Beginning in August, Republicans insisted that they would not help Democrats to raise the debt ceiling over disagreements with Democrats’ “reckless spending.”

In a letter spearheaded by Sen. Ron Johnson (R-Wis.) and signed onto by every single Senate Republican, the GOP defended its position. They argued that through the use of the reconciliation process, which allows certain types of bills to bypass normal Senate rules and pass by a simple majority, Democrats had staked out a position of governing alone.

And in fact, Democrats have used the reconciliation process copiously in the limited time that the 117th Congress has been seated.

In the spring, Democrats used the reconciliation process to pass the American Rescue Plan, a $1.9 trillion bill that passed with no Republican support. Democrats are using the measure again to advance their Build Back Better $1.85 trillion social spending bill, which originally had a much larger $3.5 trillion price tag.

Republican critics argued that because Democrats were so open to the procedure for their own political goals, they should have no problem with using reconciliation to raise the debt ceiling.

However, Schumer and other Democrats firmly rejected this approach, calling it “too risky” because of the complicated rules governing the reconciliation process.

Some observers have contended that Democrats were hoping that some Republicans would vote with them to give them political cover in the upcoming election season.

For their part, Democrats accused the GOP of turning a historically bipartisan endeavor into a partisan one.

Democrats at the time, including Biden, insisted that the vote was a symbolic protest vote, and said that they did not want to let the nation default.

In their statements on the debt ceiling, Republicans emphasized the same argument, insisting that they did not want the nation to default; Through using the reconciliation process, they argued, Democrats could have their way in governing alone and avoid a default.

With its passage, the bill will now head to Biden’s desk, where it is expected to quickly be signed into law.