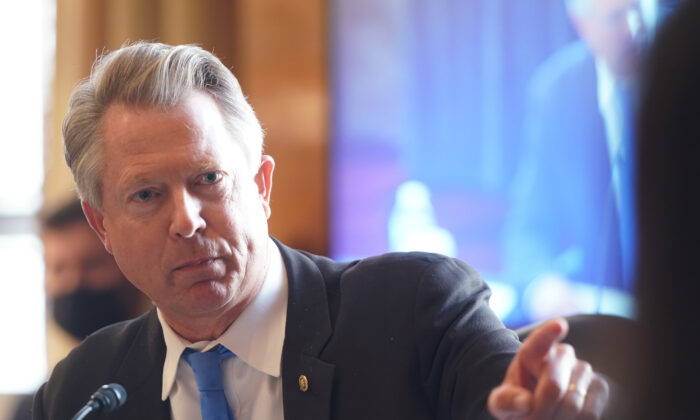 Sen. Roger Marshall, (R-Kan.) asks a question during a hearing on Capitol Hill in Washington in a file photograph. (Leigh Vogel/Pool/Getty Images)
By Zachary Stieber

The Senate voted on Nov. 15 to terminate the COVID-19 national emergency that was first declared during the Trump administration and has been extended repeatedly during the Biden administration.

The Senate passed a measure in a 62–36 bipartisan vote to end the emergency, which was initially declared on March 13, 2020.

Thirteen Democrats sided with Republicans to approve the resolution, while all the “no” votes were from Democrats. Sens. Ben Sasse (R-Neb.) and Raphael Warnock (D-Ga.) didn’t vote.

“It has now been more than two and a half years since this first-issued proclamation declaring the national emergency concerning declaration and been extended twice by President Biden since the initial declaration, most recently February of this year,” Sen. Roger Marshall (R-Kan.), who sponsored the resolution, said on the Senate floor.

“It is with this national emergency declaration, in tandem with other additional powers currently invoked by the president, which this administration is manipulating to super size government powers. And now it’s obvious they need these powers to continue their spending spree to enact their radical partisan agenda and grow government dependency through further expansion of our welfare state.”

Evidence shows the emergency phase of the pandemic has come and gone, including the number of new COVID-19 hospital admissions being near a record low and the number of people with natural immunity, or post-infection protection, rising, the senator said.

Sen. Ron Wyden (D-Ore.) voted against the measure because he said it would harm the federal government’s ability to deal with the pandemic.

The emergency enables the administration to pay for COVID-19 vaccines and other products.

It’s the third time the Senate has approved the measure. The Democrat-controlled House of Representatives has never held a vote on it.

In a statement, the White House said that even if the House approved the resolution, President Joe Biden would veto it.

“Continuing to protect against COVID-19 and ensuring that our response remains nimble are top priorities of this Administration,” the White House said, adding that terminating the emergency would “unnecessarily and abruptly curtail the ability of the Administration to respond to COVID-19.”

A Biden administration health official suggested this week that the emergency, which is set to expire in January 2023, would be extended. The administration has said it would give 60 days of notice before the emergency ends and the Nov. 11 deadline came and went without such notice.

Sarah Lovenheim, a spokeswoman for the Department of Health and Human Services (HHS), said in a statement that the emergency “remains in effect and as HHS committed to earlier, we will provide a 60-day notice to states before any possible termination or expiration.”