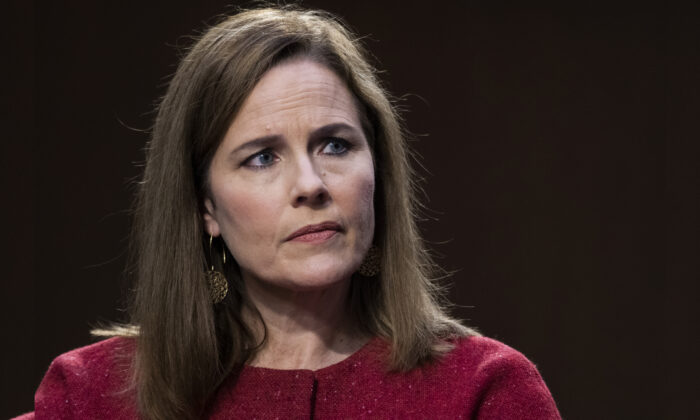 The result sets up Barrett to be confirmed as soon as Oct. 26, handing President Donald Trump a decisive judicial victory ahead of Election Day.

Democrats, meanwhile, now can’t filibuster her nomination this week. The vote limited debates over Trump’s nominee to just 30 hours, which means the upper chamber could vote as soon as 7 p.m. on Oct. 26.

Senate Democrats renewed their opposition on Twitter prior to the procedural vote on Barrett’s confirmation. She was nominated by Trump last month following Justice Ruth Bader Ginsburg’s death.

All Democrats are expected to vote against Barrett’s nomination, and on Oct. 25, Sens. Lisa Murkowski (R-Alaska) and Susan Collins (R-Maine) sided with Democrats in voting against limiting debate. Murkowski over the weekend, however, signaled that she will vote to confirm Barrett, after initially expressing skepticism.

Collins has said she will vote against Barrett’s final confirmation, saying it’s too close to the Nov. 3 election.

“I believe that the only way to put us back on the path of appropriate consideration of judicial nominees is to evaluate Judge Barrett as we would want to be judged—on the merits of her qualifications,” Murkowski said on the Senate floor on Oct. 24. “And we do that when that final question comes before us. And when it does, I will be a yes.”

Sen. Joe Manchin (D-W.Va.), considered a moderate Democrat, said over the weekend that he would vote against Barrett’s confirmation.

Republicans only need 51 votes to confirm a new justice, meaning that with a 53-member majority, the GOP can afford to lose up to three Republicans, with Vice President Mike Pence able to cast the tie-breaking vote if a 50-50 split occurs. Pence’s vote isn’t expected to be required as Sen. Mitt Romney (R-Utah) has repeatedly said he would confirm Barrett.

Democrats have voiced opposition to Barrett’s confirmation because they believe she would imperil former President Barack Obama’s signature Affordable Care Act, known as Obamacare, when the Supreme Court convenes to take up a challenge to the landmark health care law in mid-November.

They have also accused Republicans of hypocrisy for moving to confirm a justice so close to an election, saying that when Justice Antonin Scalia died in 2016, the GOP-controlled Senate refused to vote on Obama’s choice, Judge Merrick Garland, to replace him.

Senate Majority Leader Mitch McConnell (R-Ky.) has made a distinction between the two scenarios, however, saying that during Obama’s nomination there was a divided government, when the Senate and the presidency are held by different parties. Republicans currently hold both.

“In the last midterm election before Justice Scalia’s death in 2016, Americans elected a Republican Senate majority because we pledged to check and balance the last days of a lame-duck president’s second term,” McConnell said last month. “We kept our promise. Since the 1880s, no Senate has confirmed an opposite-party president’s Supreme Court nominee in a presidential election year.”

And last week, when the Senate Judiciary Committee voted on Oct. 22 to advance Barrett’s nomination to the full chamber, Democrat senators boycotted the vote. Instead, they opted to place pictures of people who rely on Obamacare in their seats.

Trump has already successfully nominated two other justices, Brett Kavanaugh and Neil Gorsuch. If Barrett is confirmed, it would give conservatives a 6–3 majority in the top court.

With few other options available, some Democrats in Congress have threatened to “pack the court”—a term used to describe expanding the Supreme Court with more justices—with presumably liberal justices if Barrett is confirmed. Democratic presidential nominee Joe Biden last week said that if elected he would form a bipartisan commission on court-packing and court reform.